Lessons from 99 Weeks of TWiG

Posted By: Christineon: June 21, 2011In: About Smarterware
Print Email 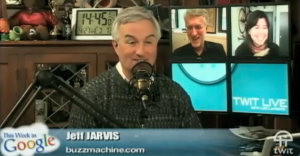 Tomorrow afternoon Leo, Jeff, and I will record the 100th episode of This Week in Google. 100 episodes! When we started the show almost two years ago, I had no idea it would be such an education in conversation, critical thinking, and performance.

I always try to play up, or work with people who are more skilled and experienced than I am. Leo and Jeff have not only been great co-hosts, friends, and heroes, they’ve been incredible mentors and teachers to me. Here are three lessons I’ve learned in the past 99 episodes of TWiG.

A live show is a better show.

As a writer I rely heavily on editing, so I really had to learn to loosen up and surrender to the live format. Now that I’m comfortable with Jeff and Leo and the TWiT community, I see that a live show with a live audience is a better show. The audience eggs me on, makes me more willing to speak up, be goofy, make a strong point, float a half-baked idea, and react to comments in chat as they happen. That interaction makes the show more fun and better all around.

Say exactly what you have to say—no less, and no more. Don’t overthink it.

The first dozen episodes or so of the show I held back a lot. Intimidated by the format and my august co-hosts, I was worried about not having something interesting or clever enough to say. I didn’t join the chat room during showtime for fear it’d be a distraction and I’d lose track of what was going on. I’d spend the show reading and re-reading the news items we were discussing to make sure I knew every detail of every story. I was overthinking it.

Friends who listened to the show said they wish I spoke more. At a conference, I saw Jeff in person and I asked him how he thought the show was going.

That’s when I made a conscious decision to stop being timid and go for it. Now, I’m in the chat room every episode. I’ve gotten a whole lot more comfortable and vocal. At times, I’ve overcompensated, and rambled about something because I thought I should, not because I had something to say. I’ve gotten better in the past 99 weeks, but I’m still learning when to speak up and when to shut up.

The most interesting thing about tech isn’t tips and tricks.

I’m the “tips” person on TWiG, charged with sharing a bit of advanced functionality or a cool new feature at the end of every episode. That’s fun and familiar ground, something I’ve done at Lifehacker and beyond for years now. But it’s the rest of the conversations that stretch my brain and make me think and grow—discussions about things like the cultural impact of the web and government/international policy around the internet. This is such a crucial time in history, and the topics we cover on TWiG are some of the most important conversations to have now. Jeff in particular has made me examine and re-examine my own views on privacy and publicness, and see where and how often the media and even my own community of technologists get the story wrong. (You gotta respect a guy who walks the talk by being so public about his own private parts.)

Every Wednesday afternoon, a couple thousand people show up at live.twit.tv to watch Leo, Jeff, me, and our guests discuss news about Google and the web in general. We in turn watch them chat in IRC as we go. Then, another 65,000 people download the audio and video recordings after the fact. A surprising number of those listeners send us passionate email agreeing, disagreeing, questioning, and correcting points made in those conversations, sometimes days and weeks later.

All of these conversations have been an incredible privilege to have.

I learn by doing, and TWiG has been the best media training anyone could ever hope to get. Thanks to Leo and Jeff and all our listeners and viewers and chatters for a fantastic first 99 episodes. Here’s to our next 100.