Posted By: Christineon: March 21, 2011In: About Smarterware
Print Email

Even though the conference is literally falling apart under its own weight, I enjoyed the best SXSW Interactive last weekend of all six years I’ve been attending. Two keys to that: reducing FOMO (fear of missing out) and being the party with people I care about versus trying to make it to every party. Sure I missed a lot of fun stuff—like crowdsurfing at Diggnation, that looked crazy—but I decided to pass on things like standing in line for an iPad and spend as much quality time with my people as possible instead. For posterity and for my own reference next year, here’s a recap.

Huge conferences like SXSW are hard on introverted nerds like me, but it all starts with having a great roommate or conference buddy. I got to do SXSW Waxy-style with my co-worker Andy, and just being able to spend IRL time with him alone was worth the price of the flight. (When you work remotely it’s too easy to forget how great it is to talk face to face.) Andy also drinks good beer and knows where to eat. Seriously, look at this mound of shrimp, crab, crawfish, sausage, and corn at The Boiling Pot. We ate that with our fingers, directly off the table on Friday night.

I don’t really go to SXSW for the panels and talks, but on Saturday Matt Haughey’s solo talk, Lessons from 11 years of community at MetaFilter was well worth the shuttle ride across the river to catch. Happily Matt did his talk with slides online on Vimeo, so you can see it, too. (Note to self: do this with my upcoming CodeConf talk.)

On Saturday evening Andy and I headed to Ginger Man for the ThinkUp community meetup. In-person meetups of online communities can be nerve-wracking, and I was worried that there was so much going on in Austin that we’d have a hard time getting people to show up, but the turnout was incredible. Here’s a recap of who came, what we talked about, and thanks to Andy, we got to enjoy some yummy beer, too. After the meetup, sadly I missed the TWiT “meat dinner” at Fogo, but I did get to have a brightly-lit gin and tonic at the Gizmodo party, chat about life hacks and life in general with Danny, and afterwards partake in a SXSW tradition 3 years and counting—a chocolate sack with some old and new friends.

On Sunday, Leo, Jeff, and I did TWiT live from Momo’s, a very cool Austin bar with a giant outdoor patio and plenty of room to chat with people. The show included a parade of ridiculously internet-famous guests, like Baratunde Thurston, Gary Vaynerchuck, Pete Rojas and Ryan Block, Lisa Bettany, Cali Lewis, Brian Brushwood, Sarah Lane, and Tom Merritt. After more than a year of being on TWiG, it was my first time meeting Tom, Sarah, and Lisa in person. So fun. You can listen to or watch the show here. Before the show started, there was a booth for show hosts, where I got to sign my first gadget—a Droid—and a couple of books and postcards. I also got to take photos with several awesome listeners. Getting treated like a celebrity is something I’m not used to at all, and it just speaks to the powerful platform that Leo has built at TWiT. 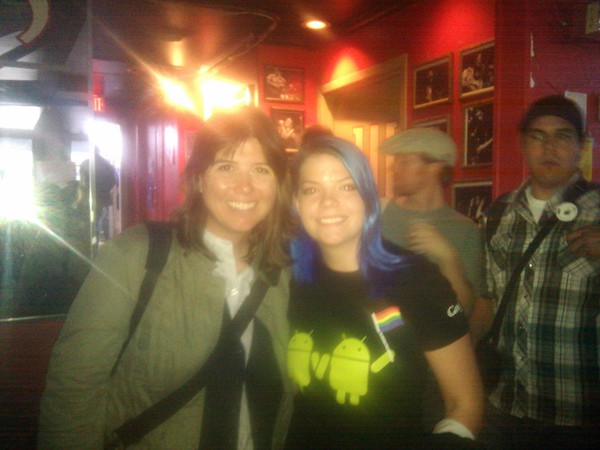 Post-Momo’s I stole away my pal Kevin Purdy for some Buffalo wings and one-on-one time. In a shameless grab for a certain Foursquare badge, we hit 5 bars in under 3 hours. I don’t remember much from later on in this bar crawl, except Kevin saying something along the lines of, “If this is 3-beer Gina, I wonder what 4-beer Gina is like!” and consequently being grateful I’m no longer Kevin’s boss. Back at the hotel room, I rehearsed my talk with Andy, who seemed impressed that I was able to articulate sentences after 4 beers and 1 diet Coke. (Thank you, ibuprofen.)

On Monday, Andy’s and my session, Worst Website Ever ||: Too Stupid to Fail, was scheduled for 11am in a very small room at the Hilton. The room was so small and the session so popular that the the line to get in stretched to the escalators and the organizers had to turn away dozens of people. Thanks to Andy’s tenacity, we got to do an encore later in the day at 5pm.

Even though my worst website pitch was only 5 minutes, I was super-nervous about this talk. I’ve never done anything close to standup comedy, and the prospect of attempting to be funny after comedic geniuses like Mike Lacher and Ze Frank was scary as all hell. It turns out that hearing laughter in a room while you’re on stage telling jokes is a special kind of high. Mike blew us all away with his hilarious Fax App Store pitch (Fap store!) but everyone’s pitch was fantastic, and I was so grateful to be included in such a talented group. Thanks especially to Andy for his help refining my pitch and landing my jokes. We got some good reviews on Twitter, too.

#worstwebsiteever was seriously one of the funniest things I’ve ever seen. best #SXSW11 session so far.less than a minute ago via Twitter for iPhone

Nerves got me and I wasn’t thrilled with how I did at the 11am session, but by the 5pm encore I was so tired I didn’t have the energy to get anxious, and I think that improved my delivery. Andy’s planning to put together video with the slides from the session as soon as SXSW releases the official audio. I’ll update this post when it’s out. For a preview of some of the bad ideas, here are Ogilvy’s notes: 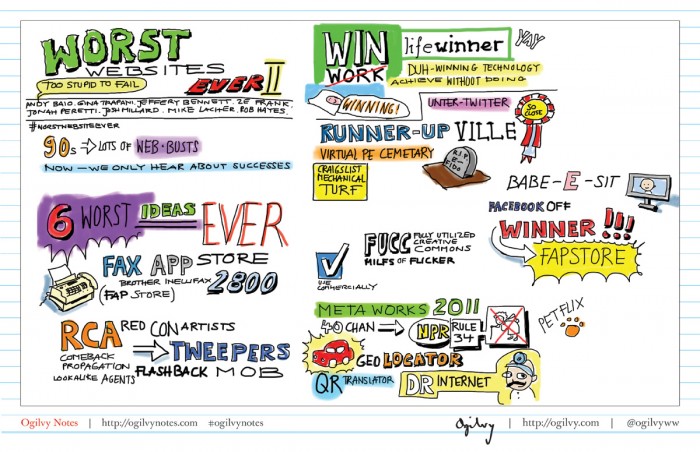 Also inspiring: Felicia’s keynote interview—seriously, how do you not love that woman?— and watching Gary V whip Ballroom D up into a frenzy with his passion and speaking skills. Here are all my photos from Austin.