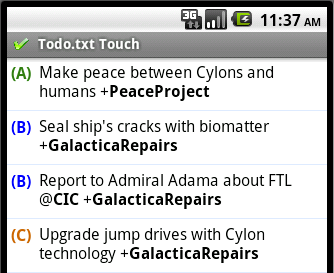 My first Android app, Todo.txt Touch, manages your todo.txt file stored at Dropbox—and it’s now available for beta-testing. Before it hits the Android Market, there are some issues to be ironed out, but in the meantime, you can download an early apk to give it a try on your Android handset.

Todo.txt Touch is a companion app to Todo.txt CLI, a command line task manager that adds, updates, prioritizes and completes items on your todo.txt list in the terminal. It supports task priority, projects, contexts, and an archive of completed items. Once you store your todo.txt file at Dropbox, you can update it at your desk in the terminal, on your Android device using this app, or using any text editor anywhere and all the changes sync to your devices automatically. Eventually we hope to support other cloud sources, like perhaps Simplenote.

Here are some screenshots of Todo.txt Touch in its current state in action. Click any image to enlarge it. 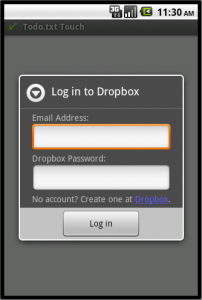 When you launch the app, you log into Dropbox, and the app creates a Dropbox/todo/ folder and puts a todo.txt file there. Right now the app doesn’t work without logging into Dropbox first (but we hope to fix that). 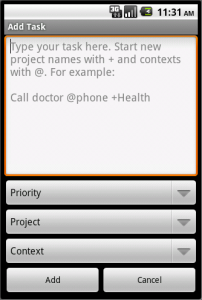 Just like the Todo.txt CLI, assign a project or context to a task by using the + and @ sign. For example, the task “Call doctor @phone +Health” associates that task with the @phone project and +Health project. Think of projects and contexts like tags that help you filter your task list down to situations in which you can do them, or projects with which they are associated. 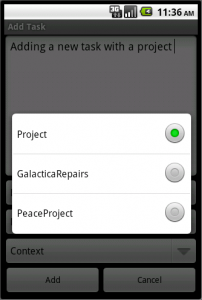 If you’ve already entered a project or context, you can add it to a new task by just choosing it from the Project or Context dropdown. The Priority dropdown lets you assign A, B, or C priority to a task. 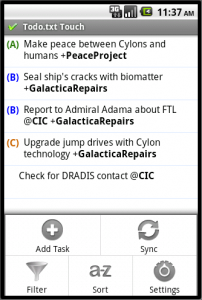 Once you’ve added a few items to your todo.txt file (or copied your existing one to the Dropbox folder and synced), they will be listed in the main screen of the app. Todo.txt Touch automatically colors priorities, and highlights contexts and projects.

Long-press any task in the list to bring up a context menu of possible actions: Complete (mark as done), Prioritize (assign a priority), Update (edit the text of the task), or Delete. 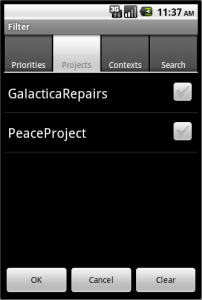 From the Filter menu item, you go to this screen, which lets you filter tasks by any combination of priority, context, or project. The search tab lets you see only tasks which contain a keyword. (We plan to implement search the more standard Android way—by tapping the Search button your handset—soon.) 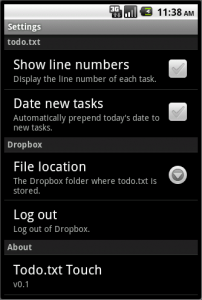 The Settings area of Todo.txt Touch lets you show hidden-by-default task line numbers, automatically prepend today’s date to new tasks, change the default folder in Dropbox where you store todo.txt, and log out of Dropbox. There’s also more information about the whole project in the About box.

A few gotchas in the beta you should know about: the app doesn’t work if you’re not connected to the network, the search button doesn’t trigger search, and there’s no done.txt file support yet—completed tasks remain in your todo.txt file. If you’re an Android developer, help us close some of those issues.

I’ve been having a ball learning about Android development from my fellow project contributors, and I’m thrilled this little experiment has turned into something usable which I’m already living in on my phone.

Download the latest release of the apk here, or scan this barcode: 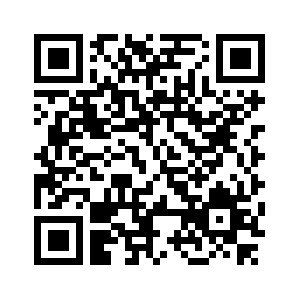