BREAKING NEWS
GMT+2 08:54
Home Software Webapps What to Expect From “Google Me”

What to Expect From “Google Me” 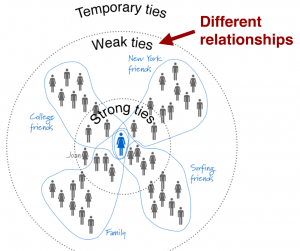 My greatest hope for the hotly-rumored, might-launch-any-day-now social networking app “Google Me” is that it will not merely clone Facebook in a weak attempt at parity, but that it will innovate and solve problems that plague existing social networks.

Last month, a senior user experience researcher at Google, Paul Adams, gave a presentation entitled “The Real Life Social Network.” The 224 slides, embedded below, describe some of the problems and common user behavior on existing social web sites, and suggest how to better design that experience. While the presentation is targeted towards businesses who want to use social media to get their message out, it also serves as a roadmap for what Google will attempt to do with Google Me.

According to Adams, the biggest problem for users on social networks like Facebook is that all your “friends” are in one big bucket. Unlike real life, there’s no way to differentiate how you act and interact with different groups of people in your life. When you go to Mom’s house on Thanksgiving you behave differently than when you’re at Hooters with your college friends, but online all those people appear on a single friends list.

Adams also differentiates between strong ties (the 2-4 people you call on the phone at least once a week), weak ties (friends of friends, the co-worker who’s two cubicles down) and temporary ties (the person you’re buying a cup of coffee from). Collapsing all these different groups and relationships into a single context–like Facebook–and combining them with the permanence of the internet can lead to a lot of awkward situations. Like Debbie, the girls swim coach who realized, to her horror, that her 10-year-old swimmers could see her commenting on wild photos from the gay bar where her adult friends work.

The entire slideshow is embedded above. Adams also compiled reference links in a blog post here: The data behind The Real Life Social Network.