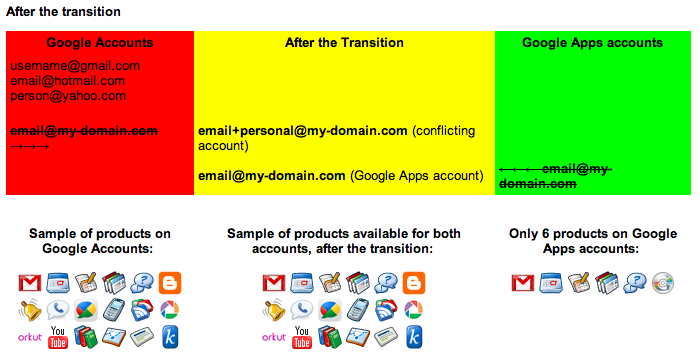 Google Apps users who want access to all the same products that regular Google Accounts have won’t have to wait much longer. An anonymous tipster tells me a Google Trusted Tester program is underway right now, which “transitions” Google Apps accounts to full access to all GOOG products, including Voice, Reader, Buzz, Analytics, and more. Here’s the official Help page which includes a visualization of the transition, in the screenshot here. (Here’s a PDF, in case they pull access to the link.)

On this week’s episode of TWiG, Leo, Jeff, and I were hoping aloud that there would be some way to merge existing Google/Apps accounts into one. It doesn’t look like that will be possible. However, if you have a Google account that “conflicts” with your Apps account because you’ve assigned the same email address to both, GOOG will resolve the conflict by adding a +personal to your regular account’s sign-in address. Stay with me here.

Here’s what that means. If you have a Google account for sue@example.com as well as a Google Apps account for sue@example.com, after the transition you’ll still be able to sign into your Google account using sue+personal@example.com. It’s a bit confusing, and a little more work than the one-click account merge we’d hoped for. However, thanks in large part to Google’s internal Data Liberation Front, many of Google’s tools offer data export features. So, while it’ll take some time, it shouldn’t be difficult to export your data from your Google account and import it into your Google Apps account after this transition is done.

The only product I’m worried about? Google Voice. Since it’s got my primary phone number associated with it, transitioning it from my Google account to my Google Apps account won’t be a simple data export/import operation. I hope I’ll be able to port my Voice number from my original account to my Google Apps account when all this goes down. No word on when exactly that will be, but the fact that it’s in Trusted Tester phase means “pretty dang soon.”

Update: Hooray!! You can currently request to port your Google Voice account to another Google account (though not a Google Apps account–yet?) Thanks, programzeta!

About the conversion: A visualization on what’s changing [Google Accounts Help]