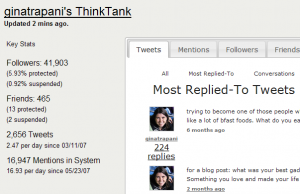 I am thrilled to announce I’ve landed a pinch-me dream job: I’m now a Project Director at Expert Labs, the new non-profit headed up by Anil Dash. I’ll be in charge of developing ThinkTank. Here’s what happened.

Last March I was thinking about buying a netbook, and asked my Twitter followers a question: Do you have a netbook? What do you love or hate about it?

When I got back 243 informed opinions by savvy netbook owners, I knew I needed a way to easily parse and share the most useful replies–and ThinkTank was born. ThinkTank is a work-in-progress web application that archives your conversations and social graph on Twitter (and eventually beyond). As you tweet, ThinkTank captures, filters, and ranks responses to those tweets so you can see the most useful responses first.

In other words, ThinkTank makes it easy to ask your contacts a question and find meaning in a high volume of responses. That’s what makes it a perfect fit for Expert Labs. Expert Labs’ goal is to make government run better by helping policy makers take advantage of the same kinds of crowdsourcing tools that the rest of us take for granted. Expert Labs is also part of the AAAS (American Association for the Advancement of Science), the world’s largest general scientific community. While you and I can use social networks to figure out what kind of netbook to buy, policy makers can use social networks to tap the expertise of scientists and technologists and inform decisions on how to govern. ThinkTank’s goal is to facilitate that.

The most amazing part of this whole thing? The first project that will be putting ThinkTank to use is for the White House itself. The President has identified a series of scientific and technical challenges that are as important to the future as the moon landing was. And we want to help drive feedback on that list, and even suggest what other items should be on there that haven’t been included. Here’s more on the Grand Challenges initiative from the White House.

As for ThinkTank, three things about its design are of note: ThinkTank piggybacks on existing social networks so that users don’t have to sign up for Yet Another Service to ask and answer questions; ThinkTank archives conversations and contacts into a standalone datastore you control; and ThinkTank is open source and community-developed.

I’m thrilled to have the opportunity to grow ThinkTank from a weekend project for asking my friends about netbooks to a bridge between the public and policy makers. Lend a hand, won’t you? Now that ThinkTank’s at Expert Labs, when you contribute a feature or fix a bug, you’re not only getting ThinkTank’s benefits for your personal use, you’re helping policy makers build a better government. Follow and fork the ThinkTank project on GitHub, join the ThinkTank mailing list, and follow @thinktankapp on Twitter.