Posted By: Christineon: February 02, 2010In: About Smarterware
Print Email 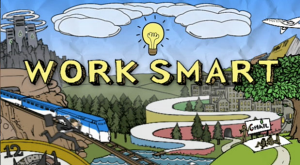 I’m thrilled to announce a new series of weekly videos and blog posts that I’ll be publishing at FastCompany.com called “Work Smart,” which will cover personal productivity in a digital world. Long-time Lifehacker readers will recognize much of the material, but some fantastic editing and animation make each 2-4 minute video segment a whole new, fun format. The debut Work Smart video segment takes on the age old digital productivity problem: email overload.

In this 2 minute, 45 second segment, I describe my three-folder system for emptying your email inbox on a day-to-day basis, and keeping on top of everything you have to do, are waiting for, or want to keep on hand for reference.

I first wrote about this three-folder system on Lifehacker back in 2006 as a riff on Merlin Mann’s five-folder system, which he published in Macworld in 2005. Of course, Merlin went on to be the king of Inbox Zero (book forthcoming!). For a much longer–and much funnier and in-depth–video on using email well, check out Merlin’s hour-long Google talk about it.

I’ve been using this system to organize my email since I wrote the original article back in 2006, and I’ve found it’s an absolute sanity-saver. At this point it’s so ingrained in my workflow I barely think about it. Though I must admit: some weeks I’m better about it than others. This week I’m on book deadline, and I do have about 40 messages that need to be processed sitting in my inbox right now.

This video segment is the first thing I’ve ever shot in a studio with a backdrop, lighting, a director, sound guy, two cameras, makeup artist, and an actual script. Besides that weird thing my hair is doing, I’m so pleased to see what came out of what felt like 600 takes. Our editor and animation artist, Adam Barenblat, did an incredible job of turning a dry, boring, “create this folder and name it this” subject into something really fun to watch. Thanks a whole lot to FastCompany.com for having me, and for the crew at Magic Bullet Media for turning out something so cool. There will be a new video every week for the next few months at FastCompany.com, and I’ll post about each new one as it gets released here as well.

If video’s not your thing, here’s the transcript of the segment.