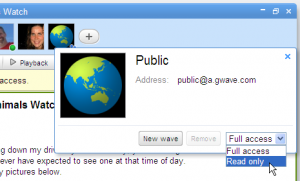 One of the most-needed missing features in the Google Wave preview rolls out this week: user access permissions. Now, rather than everyone being able to edit everyone else’s blips in a total free-for-all, the creator of a wave can add users and groups and give them either full access to edit everything, or read-only access. The binary choice is still too limiting, but GOOG says that “Reply only” access is on its way.

To limit a contact’s access to a blip you created, click on their icon on the top of the wave and choose “Read only” from the drop-down, as shown. You can give both individual users and groups read-only access; though individual access permissions trump that of the groups. (For example, if the public group has read-only access, you can grant a single user full access to edit, even though that person’s part of the group.) You can only set permissions for waves you have created.

Along with this first iteration of access permissions, the Wave team also added a “Restore” button to Wave’s playback feature. If a wave gets destroyed beyond easy repair, you can use playback to roll it back to a former version of itself.

Even though this means quite a bit of revision to the book, it’s great to see Wave evolving into something much more usable. I’ve also updated the Wave vs. the Rest chart to reflect this new feature.