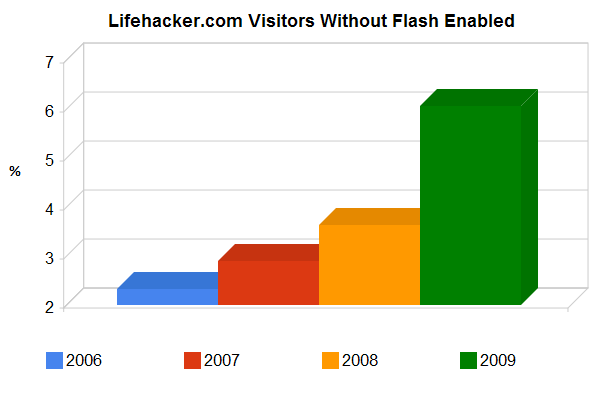 Just like it isn’t on the iPhone and iPod touch, Adobe’s Flash browser plug-in will not be on the iPad, and there are a whole lot of opinions about that decision. Predictably, Steve’s apostles are smug, Adobe’s pouting, and the rest of us will have to field questions from our relatives about why they keep seeing a blue lego piece. Flash usage has been declining over the years anyway, and a few web publishers have shared numbers to prove the point. 32% of visitors to John Gruber’s Mac blog Daring Fireball, which has a large percentage of visitors from the Flashless-by-default iPhone/iPod touch, did not have Flash enabled. Andy Baio says 16% of Waxy.org visitors don’t have Flash enabled, up from 4% a year ago. This site wasn’t around a year ago, but about 16% of Smarterware visitors don’t have Flash enabled either.

Because its readership represents a mixed group of both Mac and Windows users–albeit more tech-savvy ones than your average web surfer–I ran the numbers for Lifehacker, which currently gets about 39 million visits a month. As you can see in the chart above, the number of Lifehacker visitors without Flash enabled nearly tripled from 2.32% in 2006, to 6.07% in 2009.*

My attitude about Flash? Thanks for all the video, but it’s time to go. I welcome HTML5 and the browsers that support it. For an even-handed discussion about the realities of Flash from a current Adobe employee who doesn’t work on Flash but does have lots of experience with standards, check out John Nack’s post, called “Sympathy for the Devil.”

* Update: These numbers do not include the majority of iPhone/iPod touch traffic to Lifehacker because a partner manages Lifehacker’s mobile site and as far as I know, we’re not using the Google Analytics tracking tag for the main site on the mobile site.