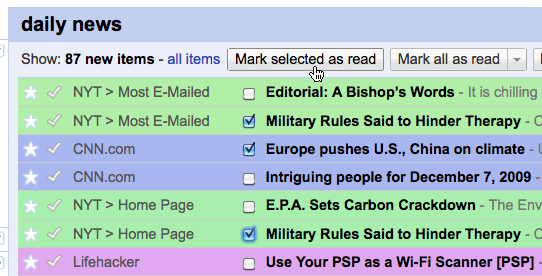 If you use Google Reader’s list view (instead of expanded), you want to scan headlines and selectively mark several items as read without having to expand them–and a new Greasemonkey user script, Google Reader Mark Selected as Read, lets you do just that.

Click here to install Google Reader Mark Selected as Read (you must have the Greasemonkey Firefox extension installed first), and your subscription headlines will show up with checkboxes next to each. Check the ones you don’t want to read, and press the “Mark selected as read” button as shown in the screenshot. This super-useful script is written by Dmitry Rodiontsev and slated for the next release of Better GReader. Thanks, Dmitry and bel9ev!

Update: Reader leifern reminds us that from the keyboard you can move up and down headlines in list view using the n and p keys, and mark items as read as you go using the m key. So this user script is for the mouse-fans in the room. Thanks, leifern!