The First Google Wave Search You Must Know 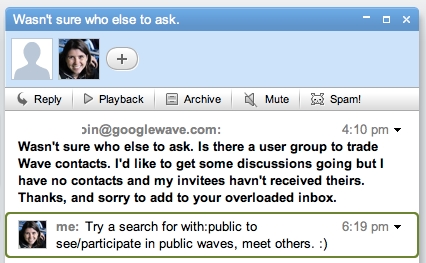 If you’re one of the lucky folks who got into Google Wave this week, your excitement probably turned to “Now what?” when you logged in and realized you had no one to wave with. If anyone on your Google account’s Contacts lists also has Wave you’re set–but for some folks that’s no one, or just one person. I’ve gotten a few waves from people saying “I have no one to talk to, and you’re the only one on my list.”

If that happens to you, it’s time to break out the first search command every Wave newbie needs to know: with:public, which returns a huge moving sea of public waves anyone can read and update. There you can dive in, meet other wavers, see what’s possible with Wave, and ask how to do stuff. Wave documentation is building up fast and furious inside Wave, and since everyone’s new to it, everyone is asking questions and lending each other a hand.

Once you’re tired of your inbox crawling with public waves? Save a search for waves just to you by using the in:inbox to:you@googlewave.com to pare down your list.