BREAKING NEWS
GMT+2 07:20
Home Cloud Computing How to Back Up Your Full-Size Flickr Images by Set

How to Back Up Your Full-Size Flickr Images by Set

If you email photos to Flickr directly from your phone like I do, you probably don’t always have a copy of the images you’ve published online on your computer. There are a few applications that back up your Flickr photos, but right now I’m digging Dan Benjamin’s (admittedly geeky) Python script, FlickrTouchr.

FlickrTouchr doesn’t support video uploads or grab any metadata about your photos (like tags, comments, favorites, etc). But it does arrange your backups by set name. In one command, you authorize FlickrTouchr to access our Flickr account, and it gets busy downloading your files. You’ll need Python to run this and a folder to save your images. (Python comes in OS X, install it on Windows from here.) Here’s what FlickrTouchr looks like in action.

Download FlickrTouchr and as per the README, invoke it using the commands:

When it starts going you’ll see it grabbing your images. Wherever you get the error “Failed to get original”, FlickrTouchr is trying to get a video. Currently the script does not back up video files. 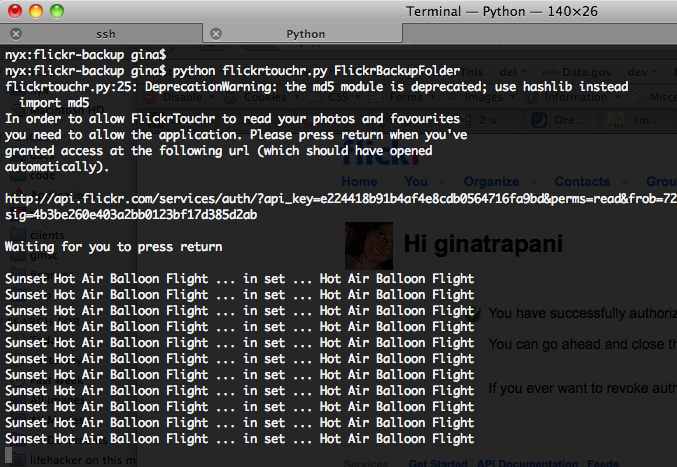 Once the script gets running, you can see it create folders of images on your hard drive based on your Flickr set names as it goes. If a photo isn’t in any set, it gets saved in a folder called “No Set.”

If you schedule this script to run on a weekly basis as Dan suggests, it will simply update the photos that don’t already exist in your backup. Just the other day I was complaining about how non Flickr Pro users lose access to photos beyond the latest 200; this is a good way to ensure the full-size image files don’t get lost in the ether once they’re past that number.