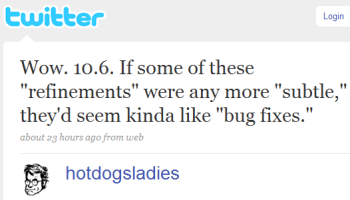 Merlin Mann’s tweet about Snow Leopard hits the nail on the head. Even though David Pogue says this is an “uninformed wisecrack,” I’m still calling Snow Leopard a service pack. “Snow Leopard Fixes Leopard’s Bugs” is not the headline you’re going to see in the NYT or WSJ. Instead the tech press told just the story Apple served them on a silver platter: that they did something noble and interesting and efficient by making their operating system smaller, faster, leaner, and even improved in a couple of “subtle” ways (a word I used). And for only $30!

It’s not a very original story. In the wake of a bloated Windows Vista, with netbooks and smartphones offering smaller but less powerful hardware, the “smaller/faster/leaner” sell is the marketing tact of the year, and everyone’s trotting it out. Look at Google Chrome (which is taking a piece of Firefox’s bloated pie) and Google Chrome OS and Windows 7.

Don’t get me wrong, “smaller/faster/leaner” is exactly what Snow Leopard is, but it doesn’t deserve a +.1 version number increment. To end users, it’s just a faster Leopard. While we all swooned over Apple’s cheap-cheap pricing, on further thought, this is an upgrade I’d expect to see come down for free via Software Update.

I’ll admit: I’ve never built an operating system, and Snow Leopard’s code improvements, which are invisible to me, might be a lot more significant than I’m acknowledging. Taking Apple on their word about Grand Central Dispatch and 64-bit computing and OpenCL–all things that ultimately mean nothing to me–Snow Leopard appears to be a solid upgrade that future-readies your Mac. It’s an upgrade I’m installing right now because the speed improvements and disk space savings alone are worth the $30, especially on older Intel Macs like my MacBook Pro. However, in terms of impact on the end user, Snow Leopard is not even close to the 10.4 to 10.5 upgrade from Tiger to Leopard that gave you 200+ new features. Charging anything more than $30 would have been highway robbery. After forking over the 30 bucks, I just feel kind of nickel-and-dimed.

Make no mistake: Snow Leopard is all about Apple readying their operating system to run on smaller, less powerful hardware (a tablet, perhaps?) and you just get to help them test it on your current hardware now. For $30, I guess that’s not such a bad deal.