How Jim Collins Tracks His Workday (and Pillow Time)

Posted By: Christineon: May 24, 2009In: About Smarterware
Print Email 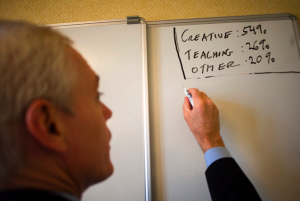 I’ve got my own pie chart of how I want to spend my time, so it was fun to hear that Jim Collins, author of bestselling book Good to Great, also has a similar breakdown, pictured right. The New York Times reports:

That, he explains, is a running tally of how heâ€™s spending his time, and whether heâ€™s sticking to a big goal he set for himself years ago: to spend 50 percent of his workdays on creative pursuits like research and writing books, 30 percent on teaching-related activities, and 20 percent on all the other things he has to do.

Collins is a whole lot more diligent about tracking his progress than I’ve ever been, though.

These arenâ€™t ballpark guesstimates. Mr. Collins, who is 51, keeps a stopwatch with three separate timers in his pocket at all times, stopping and starting them as he switches activities. Then he regularly logs the times into a spreadsheet.

Collins also logs how many hours he spends sleeping, at night and during naps, and logs a rolling average which he compares to the amount of sleep he needs over 10 days (70 hours).

Collins is also laser-focused on being a ruthless editor, and saying no to taking on too many speaking engagements or consulting gigs (at a hefty $60-65k a pop), book tours, or staff members.

This orientation â€” a willingness to say no and focus on what not to do as much as what to do â€” stems from a conversation that Mr. Collins had with one of his mentors, the late Peter F. Drucker, the pioneer in social and management theories.

â€œDo you want to build ideas first and foremost?â€ he recalls Mr. Drucker asking him, trying to capture his mentorâ€™s Austrian accent. â€œZen you must not build a big organization, because zen you will end up managing zat organization.â€

Usually I’m distrustful of anyone who gets called a “guru” (note that people have called me that, much to my dismay), but I really enjoyed Good to Great. Collins’ painstaking workflow ranked him even higher in my book. Check out the whole NYT profile: For This Guru, No Question Is Too Big.