BREAKING NEWS
GMT+2 12:26
Home About Smarterware The Realities and Responsibilities of “Crowdsourcing”

The Realities and Responsibilities of “Crowdsourcing”

Posted By: Christineon: March 05, 2009In: About Smarterware
Print Email 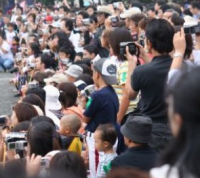 The straight-faced definition of crowdsourcing is using the ability to communicate with thousands of people efficiently on the internet to get those people to do something for you. To me, “crowdsourcing” is also one of those annoying internet neologisms that’s overinflated by “Web 2.0” marketing hype, so I qualify it with quotes. Even though I “crowdsource” information all the time, quality results require stringent editing, checking, and yes, curation. I’ll be on a panel at South by Southwest Interactive in Austin, TX called “Curating the Crowd-Sourced World” on March 13 to discuss just this.

As a part of their SXSW coverage, The Austin Chronicle quoted me as saying,

For a blogger, crowd-sourcing is just outsourcing your research. Without fact-checkers, why not?

Since the reporter asked for a definition to go in his “glossary with a sense of humor,” I said that with tongue lodged firmly in cheek. The truth is that crowdsourcing research–and editing and even fact-checking(!) the results–is a serious subject with lots of issues. Because I felt like being cute, I crowdsourced what “crowdsourcing” means, by asking about 9,000 people on Twitter. My followers didn’t disappoint; several nailed some of the thornier aspects of the issue in their 140-character responses.

Here are a few things people said (some of which I edited–haha).

I’m particularly stuck on the third item, the great point that crowdsourcing done in certain ways creates an echo chamber. That happened at Lifehacker all the time, especially with our weekly Hive Five feature: we’d rave about Product X that does Y. Then, weeks or months later, we’d ask, “What’s your favorite product to do Y?” Unsurprisingly, readers would mention X. There’s obviously a lot of danger in asking people you know to tell you what you want to hear.

I think I may be the only person not from the art world on the SXSW panel, so I’m hijacking the word “curation” to describe what I did at Lifehacker and do here and do with my open source software projects–which is to be an editor, to pick out the best stuff to include, and ignore the rest. It should be a fun discussion. If you’re going to be in Austin I’ll hope you’ll attend.

Now, it’s only appropriate to ask you to post what makes you most excited (or freaked out) about the brave new “crowdsourced” world–in the comments.