The Cult of Done Manifesto by Bre Pettis and Kio Stark

Posted By: Christineon: March 19, 2009In: About Smarterware
Print Email 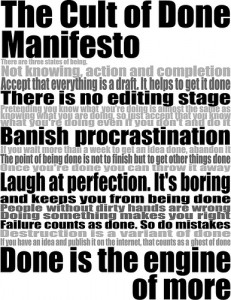 You’ve got to wonder what makes a guy who builds 3D printers which also ice cupcakes tick. Apparently it’s an obsession with getting things done. Maker-of-crazy-cool-things Bre Pettis posts his and Kio Stark’s manifesto for the “Cult of Done,” 13 edicts about finishing. Here they are, bolded bits mine:

1. There are three states of being. Not knowing, action and completion.
2. Accept that everything is a draft. It helps to get it done.
3. There is no editing stage.
4. Pretending you know what you’re doing is almost the same as knowing what you are doing, so just accept that you know what you’re doing even if you don’t and do it.
5. Banish procrastination. If you wait more than a week to get an idea done, abandon it.
6. The point of being done is not to finish but to get other things done.
7. Once you’re done you can throw it away.
8. Laugh at perfection. It’s boring and keeps you from being done.
9. People without dirty hands are wrong. Doing something makes you right.
10. Failure counts as done. So do mistakes.
11. Destruction is a variant of done.
12. If you have an idea and publish it on the internet, that counts as a ghost of done.
13. Done is the engine of more.

Check out the cupcake-icing, 3D-object printing MakerBot here. Here’s The Cult of Done Manifesto, with two posters you can download and stick to your wall to stare at while you procrastinate. Image by spatulated.