If you hate listening to voicemail or getting interrupted by an unknown number ringing your phone during dinner, then you will love Google Voice. Google’s new phone product (which re-brands Google-acquired GrandCentral) makes dealing with voice communication less than awful.

I’ve been a GrandCentral user for well over a year now, but Google Voice adds two key components that complete the must-have feature puzzle: voicemail transcription and SMS. Now that I can read (read!!) my voicemail and you can text message my Google Voice number, I’m making it my primary phone number. Alongside its awesome filters, Google Voice is essentially the Gmail of voicemail and phonecalls.

Here’s what my Google Voice box looks like right now, and how I’m using it specifically.

First I should explain why I’m so cranky about the phone. Like most introverted netizens who prefer textual communication, I hate listening to voicemail (and often will put it off for weeks). My personal hell includes holding a hot device to my ear while listening to someone “um” and “ah” for half an hour through information they could have just emailed me. I don’t have a land line or an office line; my one single phone number is my cell phone, which I carry all the time. As a result, if I want to get calls from my friends, it means any schmoe who I’ve ever given my number can make the device in my pocket ring and interrupt me wherever I am and whatever I’m doing.

At the same time, the phone is obviously a necessary appliance in modern life, especially for people who like to receive paychecks from other people who don’t loathe the phone. I’m a text-messaging fool, and I’m not totally anti-social. I do love real-time voice communication with the people who matter to me, like friends and family.

What’s cool about Google Voice (since it was GrandCentral), is that you can set up custom behaviors based on who’s calling. For example, my close friends’ calls can get forwarded directly to my cell phone. My co-workers’ calls can get forwarded to my cell phone only during business hours. Unknown callers can go straight to voicemail, or I can get the option to “screen” them–that is, listen in on their voicemail as they leave it and decide on the spot if I want to pick it up.

Now, the new Google Voice brings voice-to-text transcription to the table. When folks do leave voicemail at your Google Voice number, GOOG will transcribe their words and email or SMS you the text of the message. The transcriptions aren’t perfect (it calls me “Tina” below), but they’re close enough to get the gist. You can also listen to the recording if you’re not sure you got the whole message. Here’s what a couple of transcriptions look like in my inbox. (Google Voice colors words it’s not so sure of gray, words it is black.) 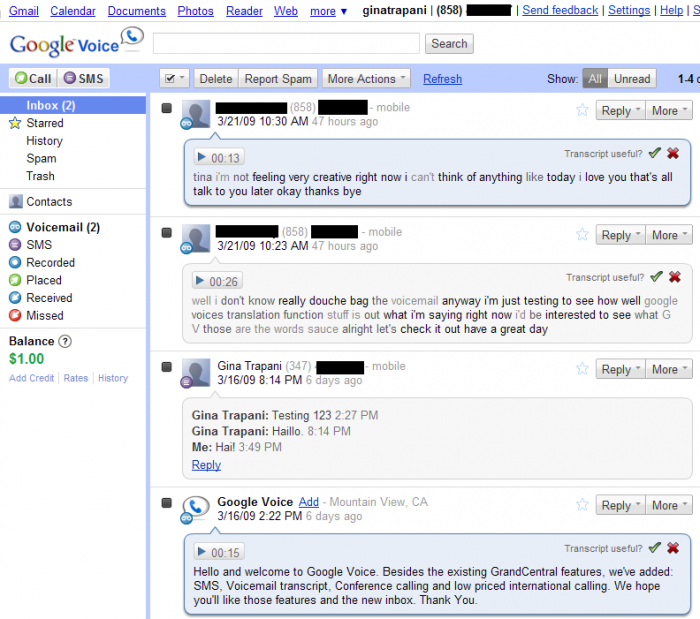 Now that Google Voice supports SMS, you can send and receive text messages from your GV number as well, which is the last piece I needed to finally tell all my friends and family, “Here’s my new phone number.”

That’s the catch, of course: if you switch to Google Voice, it means changing your number, which is a pain. But like a Gmail address or P.O. box, it’s a number you can give out freely without worrying that Annoying Guy is going to call your cell phone at 6AM for no good reason.

There are two other minor annoyances about Google Voice. First, you have to associate your number with a Google Account, but it doesn’t yet support Google Apps accounts. This is important for Google Apps users to know because your Gmail account contacts become your Google Voice contacts. Second, sending an SMS from your cell phone that appears to come from your GV number doesn’t seem possible yet (unless I missed it). As Google Voice rolls out to the public, I expect iPhone/Android apps to come out soon which let you do that and more. Update: conedude13 points out Google Voice’s mobile site, which you can use to send text messages from your phone (though it’s more clumsy than your mobile’s built-in SMS app).

Google is rolling out the Voice product to GrandCentral users now. Here’s their full blog post about it, and a treasure trove of how-to videos: Here comes Google Voice.