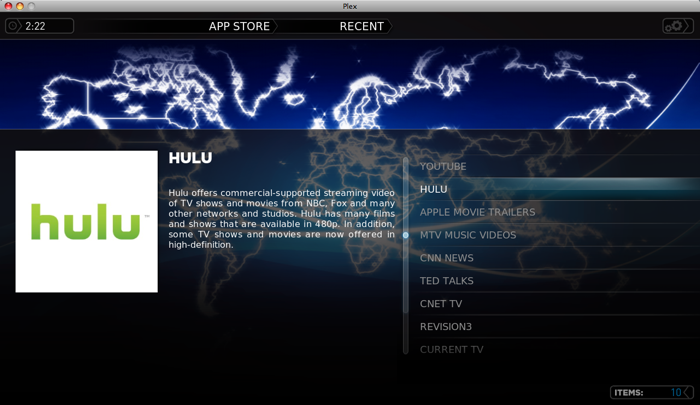 After all the hullabaloo last week about Hulu dropping support for Boxee, the popular Mac-based XBMC port, a new beta of Plex (another Mac XBMC port) drops, which offers a working Hulu plug-in in its new App Store.

As a fan of the entire XBMC project, any new release on any platform is exciting, but besides the original Xbox version, I’ve spent the most time with Plex. (Here’s a Plex writeup I did over at Macworld last October.) To install Plex plug-ins via the new App Store, install the latest beta version 0.7.8, and under Applications visit the store. There you can install apps–like the Hulu, YouTube, TED Talks, and TWiT viewers, for example–upgrade and restart them. Right now I’m streaming red carpet highlights from the Oscars last night thanks to Hulu through Plex without a hitch (or a hack).

Update: I asked Plex’s lead developer Elan Feingold if he could explain why Hulu got pulled from Boxee and other XBMC ports but works on Plex. He said,

Basically, Boxee was keeping around Hulu data on their servers, and XBMC reverse engineered the player to come up with their hack. Obviously not kosher. We use WebKit to display the site just like Safari does, and make sure it fits in the Plex window, so in a sense we’re just a specialized web browser for the TV.