Elizabeth Gilbert Makes a Case for the Invisible Creative Muse

Posted By: Christineon: February 13, 2009In: About Smarterware
Print Email 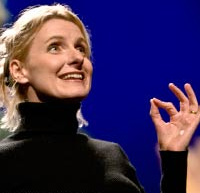 Anyone who makes things for a living should watch author Elizabeth Gilbert’s 20 minute talk at the TED conference this month (full video below). Gilbert published the mega-Oprah-bestseller Eat, Pray, Love which is soon to be a movie starring Julia Roberts. In this talk she explains one way she’s found to quell the anxiety that comes with following up after a big commercial success. Namely, she’s gone back to the ancient idea that creative inspiration is an entity separate from us, which speaks through us: the muse, as it were.

It’s not a popular idea these days.

In fact, my pal Merlin Mann’s been doing a convincing job of arguing that creativity is not a magic trick dependent on some mystic muse, but rather a matter of showing up every day to do your work. So it appears that Gilbert and Mann completely disagree, but if you look deeper at what she’s saying, they’re really not. Gilbert isn’t telling you to literally believe in fairies and muses.

She’s actually just proposing a way to frame your notion of the creative process to make it easier on yourself to show up every day. The muse puts distance between you and your work, and that’s a good thing, Gilbert argues. If the work’s great, you don’t get full credit, and if it’s terrible, you don’t get full blame. That psychological protection makes it easier to focus on the work instead of the reaction to it.

During one particularly despair-filled moment while she was writing her book, she actually addressed her “invisible muse.”

I lifted my face up from the manuscript and I directed my comments to an empty corner of the room and I said aloud, “Listen, you thing, you and I both know if this book isn’t brilliant that’s not entirely my fault because you can see that I’m putting everything I have into this. I don’t have any more. So if you want it to be better, you have to show up and do your part of the deal. But if you don’t do that, you know what? The hell with it. I’m going to keep writing anyway because that’s my job. And I would please like the record to reflect today that I showed up for my part of the job.”

In the end, both Mann and Gilbert are saying that showing up is the key to doing creative work. But Gilbert, on the heels of a mega-commercial success, uses this psychological construct of the muse to shield herself from the worry that could keep her from doing just that if she let it.

Here’s the full talk. (Thanks, theloveartist.)