Todo.txt for Android Gets Archiving, Swipe to Complete

Posted By: Christineon: August 13, 2012In: About Smarterware
Print Email 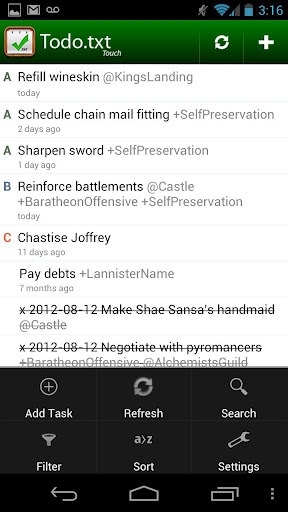 Now that the app can archive tasks to done.txt, it’s officially feature-complete, version 1.0. You can use it completely independent of the command line interface or any other desktop app or text editor.

Get it in the Google Play Store now:

Here’s what’s new and different in this version. Todo.txt for Android now:

I’m deeply grateful to the tireless contributors who make Todo.txt go, especially the people who created this release: Chuck and Florian for adding smarter syncing and done.txt support, John for creating higher density artwork, Alex for the French translation, and to all the typo-fixers and question-askers and release candidate-testers.

Read more about Todo.txt’s philosophy, check out the app, and let us know what you think.