Posted By: Christineon: January 06, 2012In: About Smarterware
Print Email 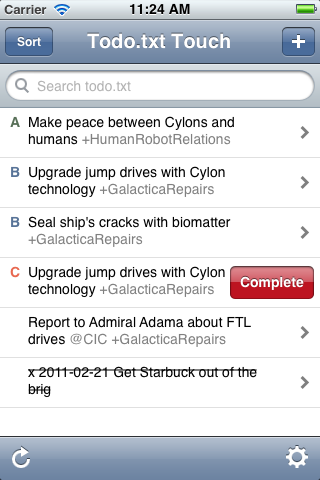 After a year of starts and stops and some flailing and nail-biting, we finally shipped. The Todo.txt mobile app is now available for iOS. Get it for your iPhone, iPod touch, or iPad in the iTunes Store now.

Just like the Android app, Todo.txt for iOS is open source and built by a community of contributors. It’s priced at $1.99 to defray the costs of running the project and help me fund its continued development.

Making this app was a whole new experience for me across several axes. As a Java developer and full-time Android user, I was a stranger in a strange land, learning a new language and a new culture. I wasn’t familiar with iOS usage conventions, not to mention its technical aspects. As such, I did more directing others who know much more than I do than I did actual coding. We modeled the UI after the existing Android app, and added in a few iOS specific features where UI conventions didn’t align. (For example, iOS doesn’t have an ever-present search button like Android does, so you pull down your to-do list to reveal a search box.)

The app has been live in the iTunes Store for just over 24 hours, and it’s gotten 11 five-star ratings and one one-star rating, and eight reviews, all positive with one exception. But what about sales compared to the Android app’s launch day?

I announced the app went on sale yesterday morning on Twitter, Facebook, and Google+, then Lifehacker ran a post on it. It got no other press coverage. I announced the Android app release in exactly the same way on January 24th of last year (minus Google+, which didn’t exist then). If my Googling skills serve me right, Lifehacker did not run a post the day the Android app went on sale, though they did the week before when I was beta-testing it.

The first day of iOS app sales was solid: just around 365 apps sold, compared to the 215 I sold on the first day of Todo.txt Touch’s availability in the Android Market. That means the iOS app sold 40% more units under somewhat similar conditions as the Android app on release day.

This isn’t a fair comparison, of course. Many users were asking for an iOS version of the Android app, whereas when we released the Android app, a mobile/Dropbox version of Todo.txt was completely new. More people have Android devices in January 2012 than they did in January 2011 relative to iOS devices. Yesterday’s Lifehacker post no doubt drove sales. Unlike the Android app, there is no way to download a compiled version of the app to install on your device for free; you must purchase it to get it. The iOS app’s beta tester’s installations will expire, but the Android apps’ won’t. Also, due to TWiG and my own Android use, I’m more likely to be followed by Android power users, which is the app’s target audience.

It’ll be interesting to compare a year’s worth of sales overall in January of 2013.

I’ve gotten a few questions since the launch yesterday. Here are some answers.

Who made the iOS app?

Through luck and connections, a small team of Todo.txt users and iOS developers came together to donate their time and effort to the project in the past three months. If this app was not open source, it would not have happened.

Chuck B. Jones has been the lead coder. He’s also an Android developer, and he ported the lion’s share of the app’s objects and Dropbox interface from the Android to the iOS project. Bewildered by the confusing process of testing an iOS app with a small number of users (what, you can’t just email it to ’em?), Shawn McGuire helped me set up TestFlight, which was a godsend. Shawn also wrote the code which made the app iPad-compatible, because unlike Android, iOS app layouts are not relative, so they don’t automatically fill a larger screen by default. Ricky Hussmann did quite a bit of work on the list and task view layouts among other things, and in general helped kickstart interest in moving the project forward after a long fallow period. John Rowley, the creator of the Todo.txt Apps’ project icon, also put in time and effort to make the art comply with Apple’s design guidelines. Thanks to them and all the folks who contributed code, bug reports, and feedback to the project.

How is the app open source? Don’t you know that VLC got pulled from the iTunes Store?

Why is the app $1.99 in the iTunes Store and $2 in the Android Market? Why the 1 cent difference?

That’s an Apple thing. You don’t set your own price in the iTunes Store, you choose one of the preset pricing tiers, $0.99, $1.99, etc. In general I don’t like using the 99-cent psychological trick of making customers think something is cheaper than it is. I prefer pricing my books, apps, etc, at a simple number (10 bucks versus $9.99). But I didn’t have a choice in iTunes.

In general, this lack of freedom around setting app details really put me off. Apple’s opinions about what your app should be are foisted upon you, and sometimes you can opt out, but not always. For example, right now I’m completely annoyed that the “shine effect” iOS automatically adds to your app icon is showing up on the icon in the iTunes store, even though I opted out of it in the app’s plist file so it doesn’t appear on your homescreen when you actually install the app. Argh.

What did you think of Xcode?

Xcode is very nice, and compared to Eclipse (where I do my Android development), much faster, simpler, and better-looking. I still have a lot to learn about using it.

Are you switching to an iPhone now?

To celebrate the app’s release, I bought myself an iPhone 4S yesterday. It’s nice. I don’t know if it’s nice enough to make me abandon my Nexus S. I’m already missing navigation and Android’s superior Google Voice app, which I live in on my phone. But, it’s been years and several versions since iOS has been my full-time mobile OS, and I’d like to get better-versed in the pros and cons of it versus Android. So we’ll see.

Anything I didn’t cover? Comments here are off for technical reasons (they’re broken), but you can ask me on Twitter.