BREAKING NEWS
GMT+2 06:00
Home About Smarterware What Google+ Learned from Buzz and Wave

What Google+ Learned from Buzz and Wave

Posted By: Christineon: June 29, 2011In: About Smarterware
Print Email

After a half day of using Google+ with the limited number of people I know in the field test so far, I like it a lot. I will love Google+ when and if all my friends show up and stick around.

I’ve been been watching Google flail around social web apps for a few years now, so what I appreciate most about Google+ is that it’s a well-thought out product informed by past experience. The more I use Google+, the more I see just how many lessons Google learned from Wave and Buzz, such as:

Don’t even test a social product without email notifications. One of Wave’s first mistakes is that it went out to test users without email notifications about new activity. New users would receive an invite, jump in, send waves, leave, and then when others responded to those waves after they left, those new users had no idea. If they didn’t return to Wave (many didn’t), the replies went unacknowledged, creating a lonely experience for the people who did come back.

G+’s email notification handling is particularly elegant. It gives you the choice—on by default—to let your friends who aren’t on yet know there’s something going on.

Field-test the hell out of a social product before public release, with real users. Buzz’s release to the public’s Gmail inbox and user profile revealed sloppy privacy user interface the hard way. It had too many real users too fast. Wave was released in “limited preview:” too few real users not soon enough. Google+ is in “field testing” right now. The language here is important. “Field test” implies that a significant number of real users outside of the plex’s walls are putting Google+ through its paces, and will find confusing UI around sensitive items like privacy before the product gets released to the public.

Google!! Field test the CRAP out of G+ before public release. #rememberbuzzless than a minute ago via TweetDeck

That said, if there’s any confusing UI in Google+, it’s not going to be around privacy. From what I can see, Google developers erred on the side of simplicity and clarity in the privacy department in G+. The Buzz wounds are still fresh.

Don’t mess with the Gmail inbox. When Buzz invaded my Gmail inbox with a flood of social-networky conversations, my first instinct was “Turn it off!” Google+ is “plus” as in “extra.” It’s a separate suite of products that doesn’t piggyback onto Google’s most successful product behind search in an invasive way.

Build a product for users first, not developers. As a developer, I loved that Wave was a rich platform for building widgets and extensions and bots on. As a user, I hated that Wave was strange and confusing. As a developer, I’m very interested in what G+’s APIs will look like, and integrating it into ThinkUp, eventually. But it appears that G+ is focused on attracting users first, then (hopefully) developers. That’s the right order.

Don’t make a separate monolith or an invasive add-on. While Buzz landed smack in your Gmail inbox, Wave was a completely separate monolith. Google+ is right in the middle. It’s not a single product; it’s a suite of products which integrate with other Google services in small, useful ways. With modularity comes flexibility, and I hope to see Google iterate each product separately as users show them what they want. 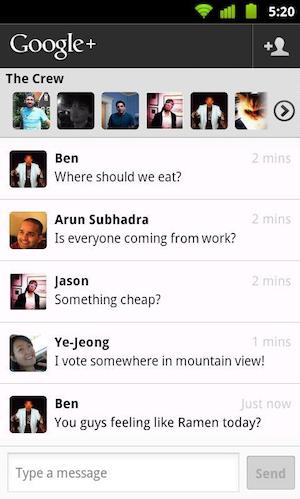 The Google+ Android app is very well done, and it’s made a few of my dual-using iOS/Android friends go all-out Android. (The iOS app is coming, and I hear the mobile web interface is good, too.) Google+ also launched with a mobile app-only feature, Huddle, which gives users even more motivation to download and install it.

Launch with a stupidly awesome “Send feedback” mechanism. Another indicator that G+ is for users and not developers: the send feedback mechanism. It sounds like a strange thing to point out, but if you’re in G+, try it. Click on the settings gear icon in the top right corner and click “Send feedback”. G+ “analyzes the page” and lets you select the area of the page you’re referring to in your message, with the ability to highlight problem areas and black out personal information. Very satisfying.

Don’t make tech authors want to write a book about it. I wrote a book about Google Wave because users needed instructions on what the hell to do with it. Google+’s interface is good-looking and intuitive to savvy web surfers—no user manual needed. Phew.

Overall I’ve got high hopes for Google+ so far. I look forward to the rest of my friends showing up on the service and hearing what they think.