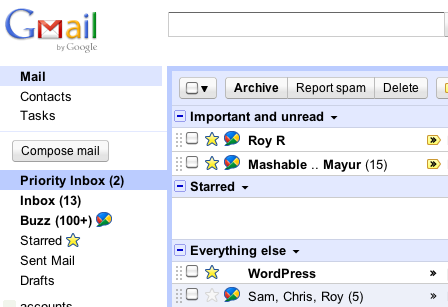 Just completed my first email sweep with Gmail’s new “Priority Inbox” feature enabled, and it’s a keeper. Over time, if this mechanism proves to be as good as Gmail’s top-notch spam filtering, it could be the reason why you only check Gmail in the browser. (Well-played, GOOG.)

Priority Inbox adds an “important messages” section above your inbox. Initially, Priority Inbox decides what messages are important based on your email and chat patterns–a message from someone you often email with will get marked as important automatically. Like the spam filter, you can train it by manually marking messages as important and unimportant as well.

You can also add up to 3 other sections to your inbox. By default it’s Priority Inbox, Starred items, and then “everything else.” But you can define what’s in each section using rules based on read/unread status, stars, and labels. For example, I keep all my unread stuff in the second section. Trusted Trio users could add a section of just items labeled “Followup.” I don’t love the idea of using my inbox as a to-do list, so I’m still experimenting with what works best for me. 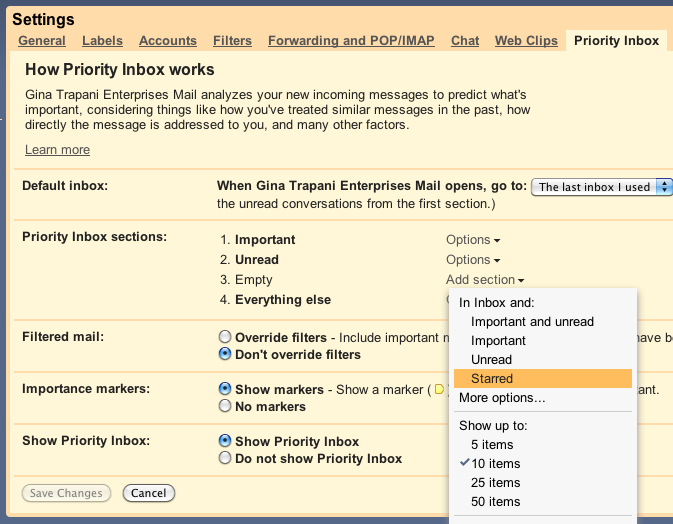 As someone who empties my inbox regularly, I was dubious about my need for Priority Inbox. My email pattern is this: I respond and archive/delete messages as I can each day, and then once or twice a week, before the list of conversations exceeds 50 items and goes to the next page in Gmail, do a clean sweep. With a well-trained Priority Inbox, aspirational inbox zero folks have the option to redefine an empty inbox as an empty priority inbox, and just let the rest flow down into the regular inbox. After only a day, already I can feel my eye focusing on the Priority Inbox over anything else on the page, and I’m responding to messages there much more quickly than if they’d fallen down the list with the rest of the bacon and mailing list messages.

The only worry I have about Priority Inbox is the additional complexity it adds to Gmail. As I said this past week on TWiG, Gmail is just getting stuffed with new and more advanced features: phone calling, Buzz, Tasks, and now this, not to mention the (awesome, but huge) buffet of optional features in Labs.

I believe most vanilla Gmail accounts are in the process of getting Priority Inbox now. If you’re a Google Apps user, opt your domain into pre-release features to get it sooner rather than later. (Simply opting in won’t make Priority Inbox just show up today; just sooner than it would have if you weren’t opted in.)