(Updated) How to Transfer Google Voice to Your Google Apps Account 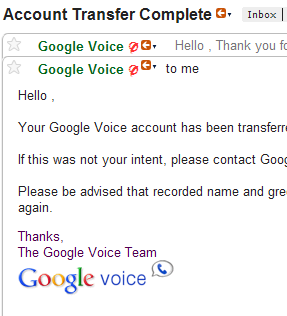 Update: Google Voice product manager Craig Walker confirms that the Apps transfer is NOT supported right now, and that it was only done for a small group of testers. Sorry, all. The good news? He says there will be a way to transfer your Voice account to Google Apps once the new GApps features that are being tested right now launch. In the meantime, I’m removing the link to the request form from this post.

Update: After I published this post, Google added very strong language to that form insisting that transfers to GApps accounts are NOT SUPPORTED (caps theirs). I’m not sure why it worked for Dustin and myself. Your mileage may vary.

Here’s the form to request the transfer [removed]. Even though it does say it doesn’t work for Google Apps accounts, it did work for Dustin and myself.