Lessons from Apple on Advertising and Aesthetics

Steve Jobs announced the iPhone 4 yesterday in his WWDC keynote, and it’s a gorgeous device with software upgrades that include multitasking, a video chat app called FaceTime, and more. I’m still a happy Android user, but I have to hand it to Apple. They continue to school the industry on aesthetics and marketing. Case in point: the FaceTime demo video.

First, some background. I got a Sprint EVO at Google I/O which has a front-facing video camera, and presumably the ability to do video calls. So far, I haven’t tried it. My general feeling about video calling is “Why?” I hate talking on the phone, so giving someone else the ability to see me while I talk on the phone seems like a yawner. I can’t imagine walking around holding my phone out in front of my face to do a video call. 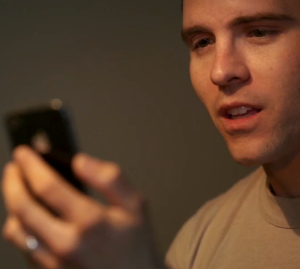 Then I watched the FaceTime video from Apple, which features babies, people in love, grandparents seeing their grandkid in a cap and gown on graduation day, girlfriends showing off new boots, deaf people signing to one another, and the one killer scene that sold me. A soldier, presumably in Iraq or Afghanistan, sits on the edge of his bunk, holding out his iPhone, video-chatting with his pregnant wife/girlfriend at the hospital back home, who is getting an ultrasound. His eyes well up when he sees his kid for the first time.

Maybe it’s because I’m a woman in my child-bearing years, but that scene–even as contrived as it was–laid me out. That’s the thing about Apple marketing. They don’t talk about how many gigabytes of memory or how many CPU cycles or how many apps (much). They aim for your heart, and show you how technology can make your life better during its most important moments.

Contrast this with the Droid ads, which actually scare my friend’s two-year-old daughter away from the TV when they come on. The dark, rainy background, the spinning globe of glowing apps, the robot hands poking at them, nary a human in sight.

Droid does. Does what? Show, don’t tell.

I’m really glad the new iPhone has been officially announced, and that Apple continues to set the bar for beautiful software and clear communication about the intersection of technology and life.

Update: I didn’t fully address the “aesthetics” part of my thesis in this post, but in short, it’s that the iPhone operating system has a polish and level of design quality that no other mobile OS has. I haven’t tried iPhone 4 myself yet, but the crazy-high resolution retina display and the multitasking/folders demo especially left me green with envy. I’d love to be able to switch between running apps so beautifully on Android.