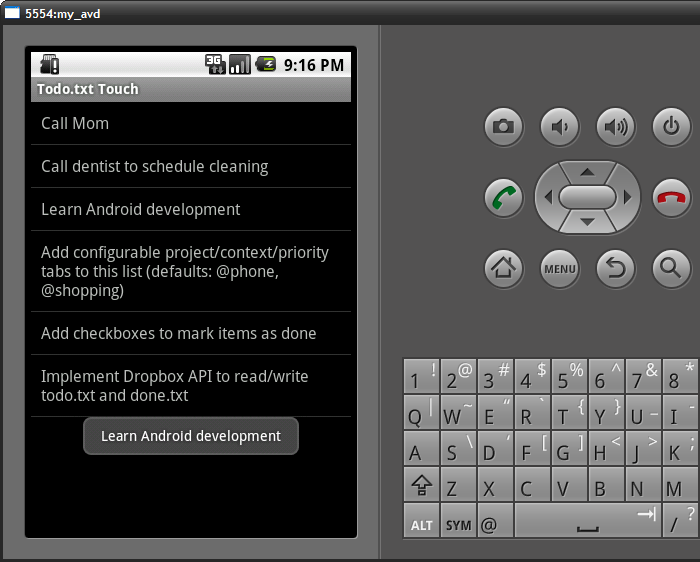 Yesterday’s post generated some interest in an Android application that manages a todo.txt file, and I’ve got an itch to try my hand at a mobile app. So, I’ve just created a skeleton Java-based Android app called Todo.txt Touch. The source code is located on GitHub, and it literally does nothing right now, except list some faux tasks from an XML file.

Goal is to get the app to read a todo.txt from Dropbox (and eventually, other configurable cloud sources), sort and list tasks by context or project (like @phone, or @grocerystore) in tabs, mark items as done and move them to the done.txt file, and sync todo.txt and done.txt back to Dropbox in the background. Right now this is just an experimental, educational undertaking; I’m not yet committed to seeing this through to completion. There are already a gazillion decent task managers for Android, and I’ve got a full-time job, so I’m not sure Todo.txt Touch will be a long-term thing. But, it would be awesome to do a little collaborative work and learn a bit about Android development with a very basic app that does a very simple thing right now. Interested in joining in? Fork the project and talk to us on the Todo.txt CLI mailing list.