Google Wave Versus the Rest, Feature by Feature 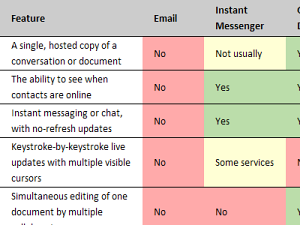 Got a great response to last week’s frequently asked questions about Google Wave, and it’s worth expanding further on the differences between Wave and the current crop of web-based collaboration offerings.

Wave combines features from email, instant messenger, Google Docs, wikis, and forums and throws its own spin on things. For a quick visual of its offerings versus similar tools, check out this feature-by-feature comparison.

You’ll notice that Wave doesn’t have a green yes in every cell in its column; it’s still missing functionality that’s holding it back from being a viable alternative in a production environment–specifically, user permissions (everyone can edit everything) and the ability to export a wave or publish it so that anyone can see its contents (not just folks logged into Wave).

This table is slated to go into chapter 1 of the first edition of The Complete Guide to Google Wave, so give me a shout if you’ve got ideas for how to polish it up before we boot up the printers.