The Best Android Apps are Made by Google 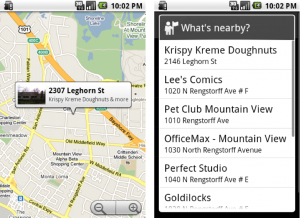 Right now, Android is the phone OS you want only if your whole life is already tied up in your Google account. All of Android’s can’t-get-this-anywhere-else applications are made by Google. Android’s Gmail client, Google Voice, Google Goggles, Google Maps, and even Google Sky and Google Listen are Android applications that either have no exact parallel on other platforms like the iPhone, or do things that their counterparts on other platforms can’t match. Let’s break this down.

Android’s Gmail client is one of the two primary reasons why I went Android. If you live in Gmail in the browser, you’ll swear by the fact that the Android Gmail client supports threaded conversations, labels, muting conversations, marking as spam–all the advanced Gmail goodness you get in the native webapp. The second primary app I use Android for is Google Voice. Being able to text via Google Voice for free as if it were the phone’s native SMS application and get voicemail transcription in-app is awesome.* Beyond the Gmail/Google Voice two-punch, Google Maps gets updates on Android faster than on the iPhone or anywhere else, like turn-by-turn directions and What’s Nearby. Finally, the brand new Google Goggles app looks like a search application I will use as often as search-by-voice.

The question is: where are the standout, can’t-get-this-anywhere-else THIRD-PARTY Android apps?

Yes, I use Twidroid, but Tweetie and TweetDeck on the iPhone are better. Shazam, Astrid, Pandora, Seesmic, Fring–all either available or have better alternatives elsewhere. You can use Amazon MP3 on Android and not on the iPhone–and that is fantastic. Android needs more Amazon MP3-like apps in addition to Google’s arsenal of offerings to become more widely-used. The Mint, Evernote, TweetDeck, and Tweetie’s have to show up in the Android Market before it can even come close to the iTunes App Store. Googler Matt Cutts says it’ll come as Android grows, and I agree. Just wish it was happening faster–because right now, if someone asks me if they should go Android, my question is usually: “Do you live by your Gmail and Google Calendar and Google Voice number? If yes, then go for it.”

* The Google Voice Android application has had its ups and downs for me. For awhile notifications weren’t coming as often as they should and I was missing texts or getting them an hour later; often Voice can’t connect calls and I have to use my cell phone’s carrier number. These days Voice has been a lot better, but it’s not yet perfect.

Here are a few reactions from folks on Twitter about this.