Note Taker Turns Your iPhone into an Endless Notepad 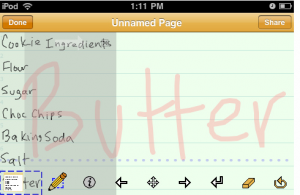 VisiCalc creator Dan Bricklin–you know, the guy who invented the spreadsheet–has delved into mobile development and released his first iPhone/iPod touch application, Note Taker. Rather than use keyboard, in Note Taker you jot notes using the tip of your finger on your touchscreen as if it were a pen on an index card. (See my bad handwriting in Note Taker in the screenshot here.) Note Taker looks and sounds more awkward than it actually is: the application employs some nifty interface mechanisms that make it easy to write long sentences across your screen. For example, it scrolls right while you jot without requiring swiping, and it shrinks your words to a legible version for reading while you write. Note Taker doesn’t do text recognition, but you can transcribe jotted notes using the keyboard. (Update: You could also just email your Note Taker image to Evernote to do the recognition for you.) This app isn’t for folks who are comfortable typing on the iPhone keyboard and have terrible handwriting, but it is for folks who like to sketch, mind-map, or list without fat-fingering small keys. You just write the way you normally would on a notepad.

My favorite part about this app is the fact that it comes from a giant in personal computing, who, after 30+ years in the business, is still motivated enough to pick up a book, learn a new platform, and release software. Bricklin explains:

Over the last couple of months I’ve been working on learning a different medium and a different business environment. In mid-September I purchased a shiny new 24″ Apple iMac and an iPhone 3GS. I signed up for the Apple iPhone Developer Program. I bought some books and started doing the tutorials, step by step. I came up with the idea for an app I needed and built a prototype, then plunged in and started creating a full app that would be good for others, too. A few days before Thanksgiving I submitted my completed app for inclusion in the App Store. It’s now just been approved and you can try it. 30 years after VisiCalc shipped: Another app from me that starts out on Apple hardware.

If you get the application, be prepared to work through the initial “Try It” mode. The multi-page tutorial may frustrate ADD-types, but it’s totally worth it to get a handle on the interface. Here’s a screencast of Note Taker in action:

The full version of Note Taker is $1.99 in the iTunes Store and Note Taker Lite is free (with a four-page limit). Bricklin says an Android version is underway.

Update: Several readers point out that if you email notes from Note Taker to Evernote, the text becomes searchable. Here’s what it looked like in Evernote when I sent my cookie ingredients list in, and then searched for the word “Sugar.”