Posted By: Christineon: December 21, 2009In: About Smarterware
Print Email 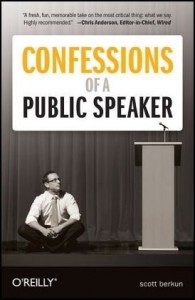 Getting up on stage, taking a microphone, and facing an expectant audience scares the crap out of most mere mortals. But rock star public speakers from Al Gore to Tony Robbins inspire and inform thousands of people with their talks–and charge $30,000 an hour to do so. Scott Berkun’s new book, Confessions of a Public Speaker, explains why, how, and what goes on before and after a great speech.

“Good public speaking is based on good private thinking,” Berkun writes in Confessions, where he recalls years of his own successes and failures traveling the country giving presentations. Preparation is the key to reducing your anxiety about public speaking, Berkun says, as is the awareness that humans are literally wired to fear the situation.

Our brains, for all their wonders, identify the following four things as being very bad for survival:

In the long history of all living things, any situation where all the above were true was very bad for you. It means odds are high you will soon be attacked and eaten alive. Many predators hunt in packs and their easiest prey are those who stand alone, without a weapon, out on a flat area of land where there is little cover (e.g. a stage). Our ancestors, the ones who survived, were the ones who developed a fear response to these situations.

Just knowing that I had sweaty palms, a pounding heart, and a serious adrenaline rush up on stage at Web 2.0 Expo because the primitive cave woman version of myself thought I was about to get eaten alive made the situation more amusing than desperate–which relieved a lot of the tension. In Confessions, Berkun outlines practical advice for softening your body’s natural fear response to speaking situations, as well as how to write and prepare your material so that you can up your chances of nailing it.

If public speaking is a part of your job–and it is, in some capacity, whether or not you’re Barack Obama–this book is a worthy read. It’s converted at least one person who has turned down speaking engagements because the idea was too scary to someone excited about getting better at a special and important skill.

Confessions of a Public Speaker [Amazon]