Posted By: Christineon: October 04, 2009In: About Smarterware
Print Email 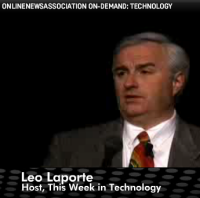 Founder of the TWiT Netcast Network (and my co-host at This Week in Google) Leo Laporte did a fantastic talk for the Online News Association last week about his path to starting TWiT. Laporte’s goal is to create a live news channel for techies online: content for smart, devoted people who are conversant in this stuff, not the mainstream BS tech coverage you get on TV. There are several gems in this talk, especially for folks wondering about the economics of niche publishing online. My favorite, however, was this part. Leo says that back in the day, after explaining to a TV exec that it’s worth targeting a small group of smart computer enthusiasts, the exec told him:

Advertisers don’t believe it’s worth advertising to smart people, because smart people don’t pay attention to brand. Smart people make an actual choice, they can’t be tricked or convinced. They research. So we can’t sell ads to a network for smart people.

Watch the whole talk for an interesting look back at Tech TV, how and why it failed, what Leo won an Emmy award for, and what led him to founding his own online network. You’ll quickly see why my other TWiG co-host Jeff Jarvis calls the TWiT Network “the model for the new media model.”

When you write and talk about technology professionally, you’re always tasked with explaining things in simple terms–which is useful for more folks, but forces you to dumb down things and sometimes even leave out interesting details. In fact, one of my favorite TWiG moments happened episode 4, where I started to explain that you had to “cron a job on your server” and then stopped myself and apologized for being so geeky. “Oh that’s fine. We’re all geeks here,” Leo assured me. I nearly did the happy dance. What a relief to talk comfortably about technology and assume your audience is smart enough to keep up. That’s what Leo’s doing at TWiT–deciding not to dumb things down (AND making money doing it).

For more on Leo’s philosophy and ambitions with TWiT, check out this (unembeddable) interview he did at Mixergy.