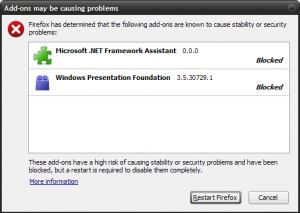 Got a surprising alert yesterday telling me two of the extensions I had installed on my PC’s copy of Firefox have been blocked because they cause stability or security problems. (Click to enlarge the dialog on the right.) Specifically, the Microsoft .NET Framework Assistant and Windows Presentation Foundation extensions were the problem children that got kicked off the island. (In my defense, I didn’t install these extensions myself–Windows Update did). My first reaction was, “Ugh, of course Microsoft‘s extensions have vulnerabilities!”

Turns out that Firefox is blocking extensions with serious bugs from major companies beyond Microsoft, including Apple, Yahoo, and AVG. Here’s the full list of blocked extensions and the bugs that are causing the blockage. (Ironically, the AVG extension is called “SafeSearch.”) In a blog post, Mozilla security chief Mike Shaver says the .NET Framework Assistant has been unblocked, but as of writing it still shows up on the published list. Kudos to Firefox for taking a proactive stance and protecting its users against buggy extensions that could degrade the browsing experience. Did you have a buggy extension installed?