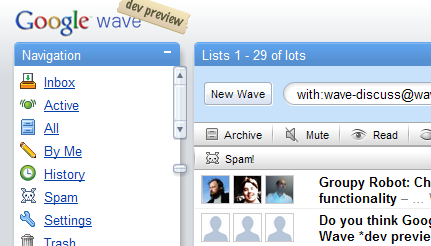 Google’s inviting 100,000 people to the Google Wave beta today, which means Twitter is already awash in people asking about and begging for entry (hello, trending topic). For what it’s worth, my sources tell me invites won’t go out until later in the day U.S. time–remember the Wave team is in Australia. Update: There’s no source link, but the Twitter trend explainer in Brizzly says re: Google Wave:

Google has announced that it will be sending out more than 100,000 invites to Google Wave. Each of those 100,000 invites will come with 8 invites to invite other people. The release time for these invitations (originally 16:00 GMT) has been moved back to “late in the day US time on Sept 30”.

In the meantime, you can sate your Wave curiosity without an invite. Check out my in-depth high-res screenshot tour of Wave over at Lifehacker this morning. Like I said in the post, Wave is only as useful as the people who are in it, so if you get an invitation and the privilege of giving out invitations, do use them very wisely. For background, see also my previous Wave posts: The Google Wave Highlight reel, and Google Wave Q&A.