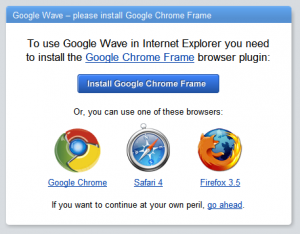 After “countless hours” of work, the Google Wave team has thrown up their hands and decided not to make Wave work in Internet Explorer natively. Instead, they released Google Chrome Frame, an IE add-on that puts Chrome’s backend inside Internet Explorer. Next week another batch of Google Wave invitations will go out, and IE users will have to install Chrome Frame or switch to Firefox or Safari to try Wave. (The screenshot is the prompt IE users will get when they try to log into Wave.) Google explains why Internet Explorer just doesn’t have what it takes to run Wave:

Google Wave depends on strong JS and DOM rendering performance to provide a desktop-like experience in the browser. HTML5’s offline storage and web workers will enable us to add great features without having to compromise on performance. Unfortunately, Internet Explorer, still used by the majority of the Web’s users, has not kept up with such fairly recent developments in Web technology.

My experience using the developer preview of Google Wave (which I’ve never even tried in Internet Explorer) has shown that Wave is consistently more stable in Chrome, and even noticeably faster in Chrome than Firefox or Safari. As such, I usually run Wave in a separate Chrome window while I do my regular surfing in Firefox–and I wouldn’t be surprised if more early adopters do the same as Wave rolls out. Until then, the IE team has a lot of work to do, because for them, hearing “my webapp is too advanced to run in your browser” from Google has to sting.