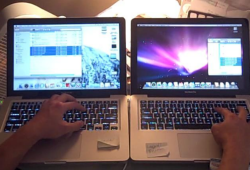 Major tech pubs put out their Snow Leopard reviews last night, and they’re all predictably positive. Snow Leopard offers lots of small and subtle improvements to your Mac plus gets speed boosts out of even older hardware for an affordable $30. This jibes with my experience of the developer build the last few months. Here’s the rundown of reviews I’ve seen so far:

Best way to see how much faster Snow Leopard is than Leopard doing a simple task like opening a few high-res photos in Preview? This video clip, courtesy of Gizmodo.