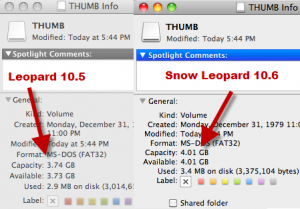 A 200 GB drive shows 200 GB capacity (for example, if you select the hard drive’s icon and choose Get Info from the Finder’s File menu, then look at the Capacity line). This means that, for example, if you upgrade from an earlier version of Mac OS X, your drive may show more capacity than in the earlier Mac OS X version.

My own tests confirm: a 4GB Cruzer thumb drive in my Snow Leopard Mac shows up with a capacity of 4.01GB. Leopard reports the same drive’s capacity as 3.74GB. (Click to enlarge the screenshot on the right.)

Kudos to Apple for leading the charge on this change for the better, which will reduce age-old consumer confusion and questions about why a drive seems smaller in the software than it says it is on the box. This change also raises two other interesting questions: Is this new “found space” part of the reason why Snow Leopard “saves” you disk space? (Because if it is, SL isn’t actually saving you anything–it’s just an accounting adjustment.) More importantly for the rest of the market: When will Windows follow suit?

Update: All the passionate points about the difference between base 2 and base 10 are well-taken. I’ve updated this post to put the word “correctly” in the headline in quotes. The base 10 calculation change is “correct” as per consumer perception–i.e., I bought a 500GB backup drive and my operating reports that there are 500GB free, which is exactly what I’d (reasonably) expect. Right now the base 10/base 2 difference is totally confusing to regular people. Software does indeed use base 2 computation, but as far as I’m concerned, reducing human confusion is more important. The possibility that this change will increase confusion for folks who now won’t get the same file size and usage stats across operating systems is a valid one; it will be interesting to see how it shakes out.