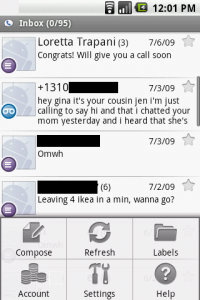 For an solution built by an independent developer without an API, GV did a great job of putting Google Voice on Android. But today GOOG finally got around to releasing their official Google Voice app, and it includes a few more features than GV, even if it’s not totally polished yet. I’m still getting my feet wet with the new app, and GV developer Evan Charlton is still deciding on his application’s fate. But all indicators point to the official app becoming my main Google Voice interface on Android. (Huge thanks to Evan for all his hard and fast-to-market work on GV.)

At first glance the two things I like most about the official Google Voice application is label access and voicemail playback (which highlights words in the text transcription as it plays). It also feels snappier.

Over at Lifehacker, Kevin runs down what you get with the Google Voice apps on both Android and BlackBerry. Here’s Google’s official announcement video.

Grab Google Voice for Android in the Android Market on your handset. As for iPhone owners, a former Googler implied that Apple’s approval process may slow up your Google Voice app. So hang in there and be patient–no doubt it’s coming.