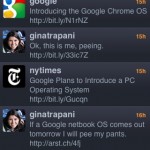 Never been very good at being right on top of breaking tech news, but the other night I happened to be on Twitter when rumors of Google’s new Chrome OS came out on Ars Technica less than half an hour before Google dropped the official announcement. (Thanks to ReneePie for the screenshot to the right.)

Much has been written but not much is known yet about what Google Chrome OS will bring–except some stiff competition in the operating system arena. There will be much to say about all this, especially on my upcoming podcast on Google and cloud computing (starting on August 1st at TWiT.tv). Until then, my cronies at Lifehacker did a nice roundup of features we’d love to see when Chrome OS gets released next year.