Firefox 3.5 Now Available–Google Gears, Tab Mix Plus Not Yet Compatible 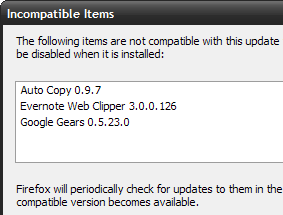 The official release of Firefox’s latest version 3.5 is available for download by the non-beta-testing public today.

The folks at Mozilla Add-ons do a great job of nudging their extension authors to make their work compatible with new versions. Still, a few add-ons aren’t there yet, notably Google Gears (not hosted at Mozilla Add-ons) and Tab Mix Plus. Update: Testers tell me a developer build of Tab Mix Plus is Firefox 3.5 compatible. Thanks all!

Luckily when you install Firefox 3.5 you get a warning upfront of which of your installed add-ons aren’t yet compatible, like the one I got today, pictured here. (Come on, Auto Copy and Evernote, get with the three-point-five!)

Here are a few others my Twitter followers are missing.

Firefox 3.5 to drop tomorrow, yay! Testers, which of your most beloved add-ons aren’t compatible yet?

StephanieBamBam said, “Firebug!!! Everything else I use has been updated, it’s wacky to me that firebug still doesn’t work.” Editor: Firebug got updated!

kerim said, “I use Nightly Tester Tools to get compatibility, but Google Gears won’t work even with that hack. Hoping they’ll update w/ 3.5.”

sastubblefield said, “Aardvark, and Measureit are the only ones I use that aren’t compatible.”

NguyenNoir said, “aside from the ACE Safari theme, all my addons work just fine (oh yeah)”

billhelm said, “TabMix Plus. I uninstalled the RC yesterday because I can’t stand firefox without it!”

tjunkie said, “I have so many useless extensions that works and it has to be google gears that is not compatible”

garygiffordjr said, “the last holdout for me is Verisign Seat Belt.”

akumu said, “opendownload. Allows me to open downloads without having to save them first.”

stephanpeterson said, “system proxy on the mac hasn’t been updated for FF 3.5”

melalegre said, “I’d like to have NoScript, AdBlock, GoogleGears, and GreaseMonkey fully running in FF 3.5.”

ClintStrong said, “Tab Mix Plus is the main one I’m missing.”

SteveFalatko said, “- sage … yes I still use RSS feeds and sage is my favorite. Not compatible with 3.5”

Ledlow said, “Automatic Save Folder didn’t update after Beta 4, so I’m hoping for an update with the release”

PhYoshi said, “Judging by the fact nothing has broken, 3.5 seems to be pretty awesome compatiibilitywise (TMP, DtA, AioS, stylish, twitterfox)”

Thanks to everyone who replied. Hereâ€™s more on why and how Iâ€™m using Twitter to run surveys like this.