Posted By: Christineon: May 19, 2009In: Desktop, Software, Webapps
Print Email 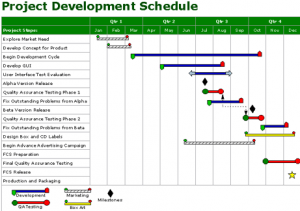 Once you get past a simple to-do list and start getting into the heavy-lifting of complex team projects, it’s time to look into project management software. My only memories of my project management course in college are dreadful words like milestones, Gantt charts, and critical paths. Still, when you’ve got a group of people at work on a long-term undertaking with lots of tasks associated with it, you need something to help manage the flow.

I asked my Twitter followers what project management software they use at home and at work, and how they like it on a scale of 1 to 10. I got fewer replies to this question than usual, which makes me think lots of people don’t use a PM app to begin with. Out of the 97 replies I did get, 17 said they use 37 Signals’ Basecamp (and gave it an 8 out of 10 average rating), 12 said they used Microsoft Project (it averaged a 6.6 out of 10 rating), and, interestingly, 9 people said they like Things (which averaged a 7.7 rating) and OmniFocus (which got a rating of 9), both for Mac OS X.

Of the two leaders, Basecamp and Microsoft Project, the comments were completely opposite: Basecamp is beautiful but in need of more features, and MS Project is ugly but powerful. Several people said they use plain text files, a spreadsheet, or an actual human project manager, and a few (presumably programmer-types) use bug trackers (like FogBugz and Trac) and wikis (like MoinMoin) to do their project management for them.

What project management software do you use at work or at home? How do you like (scale 1-10)?

Thanks to everyone who told me what they’re using. Hereâ€™s more on why and how Iâ€™m using Twitter to run surveys like this.