Fun with Knowledge Computation at Wolfram|Alpha

What’s the unemployment rate of San Diego versus New York? How many football fields would fit between the Earth and the sun? What’s the likelihood of getting two heads in 10 coin flips? As of tonight, one web search engine can calculate all that for you on the fly and more. Mathematician Stephen Wolfram’s much-hyped “computational knowledge engine” Wolfram|Alpha just went public, and it’s got more than a few data nerds tickled absolutely pink (myself included). Walpha (as I affectionately call it) finds and visualizes real-world data points from natural language queries.

I’ve just spent the last couple of hours throwing every kind of data query I could think of at Walpha. Some of the results were incredibly useful, others baffling, and others just missing. Here are some of the fun facts I learned using Walpha’s calculations.

Walpha even makes CAPTCHAs and offers web site statistics given a URL.

Still, Walpha’s very, well, alpha, and at times tonight it buckled under the load of the launch rush–but not without a sense of humor. Here’s Walpha’s error page: 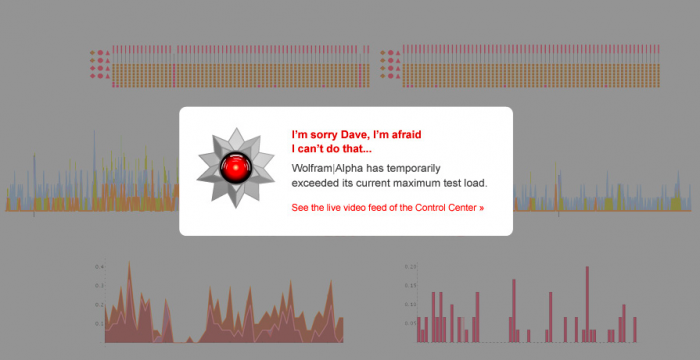 Also, Walpha balked on several questions I was sure it could handle, like what the weather in New York was the day my parents got married, and what kind of MPG the Prius gets. Don’t even try things like chicken or the egg or if a tree falls in the woods…

Still, while Walpha’s everyday uses for Joe Normal Web Searcher won’t be obvious, this thing is a goldmine for researchers, students, journalists, and bloggers. If this is the alpha, I can’t wait for the beta.