Posted By: Christineon: May 31, 2009In: About Smarterware
Print Email 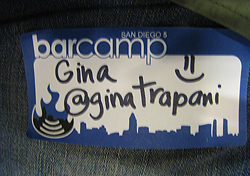 Attended my very first BarCamp here in San Diego this weekend, and came away from it super-impressed. BarCamp is a free, self-organizing unconference where the attendees are also the speakers. The schedule isn’t set till the conference starts. At that point, everyone slaps a big Post-It note describing their session on a board in the time slot and room they want to talk in and away it all goes. I’ve been to several FOO Camps, the invite-only O’Reilly event that inspired the BarCamp movement, and I’ll be honest: given FOO, I had low expectations for BarCamp. O’Reilly’s in the business of holding tech conferences, and their events are always top drawer. I didn’t think a DIY get-together whose funding was scraped together by local sponsors in the midst of a recession could even come close. Boy was I wrong.

BarCamp’s sessions ranged from very technical (hitting on topics like hosting and replicating terabytes of data, version control, and web API’s), to interactive (like an improv session which brought out everyone’s acting skills with fun games), to pop culture (like a session for theorizing on the plot of the TV show Lost). In light of Tuesday’s California Supreme Court decision, I led a session called “Ask Me Anything About Being Gay Married,” which turned into a good discussion about how the state constitution works, the meaning of marriage, and the arguments on both sides of the issue. I also pitched in on Stephen Harman’s talk on how he organizes his personal information in a hosted wiki, something I touched on a few years back in a Lifehacker feature story. BarCamp organizer Dan Tentler‘s People Hacking talk was also a must-see; hopefully I’ll be able to snag him for an interview to do a future lengthy post on the topic here or on Lifehacker.

Thanks a whole lot to Dan and the rest of the BarCamp organizers for a great weekend, to Intuit for hosting, and for all the sponsors who ponied up cash and sent folks along (like HP and Yahoo). Here are some photos I snapped at the event.

See what other folks had to say about BarCamp San Diego with a search for the #bcsd5 Twitter hash tag. More photos are filed under the same tag on Flickr.