My First Time in Second Life 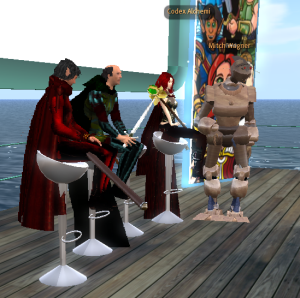 Had my very first adventure in Second Life this past weekend, the uber-popular 3D online virtual world that’s been around since 2003. It’s ridiculous that I waited this long to give it a try; like many dumb people who make uninformed assumptions, I’d always written off virtual worlds as child’s play or total time-wasters–without ever trying them. (Cue the hackneyed “I’ve got my hands full in my first life.”) But the few hours I spent in-world this weekend really changed my impressions of the place and its utility.

I downloaded the Second Life software, registered my new avatar and got in-world on my own Saturday morning. I’m an RTFM type o’ girl, so using SL’s newbie tips and instructions, I figured out how to walk and look around, check my inventory, interact with objects, and soon fly around. (FLY! Yes, you can fly in Second Life! Just like in your dreams!) Of course, within the first ten minutes I got stuck in mid-air, and was too embarrassed to ask anyone in-world for help. A desperate tweet got me the info I needed (hit Page-Down!), and I was back on the, er, virtual ground again.

Several people said they’ve tried Second Life but tired of it quickly, because it’s too easy to wander into empty spaces devoid of people, and there’s no obvious sense of purpose for being there. Both of those points are well-taken; if I was just trying things out, at that point I may have logged out and never returned. However, my visit had a purpose. My journalist friend Mitch Wagner was planning to interview the cast members of The Guild on Sunday evening, and I wanted to experience live journalism taking place in a virtual world.

Lucky for me, Mitch, who’s a seasoned Second Lifer, took the time to show me around the joint before the interview. He teleported me to two places that blew my mind: first, the Wikitecture parcel of Architecture Island, the home base for collaborative 3D architecture projects. (Think applying open source software principles and practices to 3D building plans, or a Digg or Wikipedia for Sketchup plans that you can actually climb into and use in-world and eventually, in real life.) Second, something a lot less cerebral but just as eye-popping: a recreation of the town of Bedrock from the Flintstones. Yes, I got myself a bronto rib and watched a new SL friend throw a few down the lanes at the Bedrock Bowl.

It was pretty wild.

Based on my short orientation, it’s obvious that Second Life is about meeting up with and communicating with people, and at a level deeper, building things in a 3D environment. Surely there’s more to it I haven’t yet discovered, but the secret sauce, as in any community app, is meeting and doing stuff with other people there. (In fact, while I was in Bedrock trying out the Flintstones car, my avatar lost her skullcap. The next day, some do-gooder returned it to the “Lost and Found” section of my inventory. I’m not sure how that all went down, but I was still pretty touched.)

The interview on Sunday night was a lot of fun, even though I still felt strange sitting my avatar’s body in a virtual seat in a big audience looking at Mitch’s, Felicia’s, Jeff’s, and Sandeep’s avatars sitting in virtual chairs up front. Here are a few screencaps I took during the interview.

Second Life offers voice chat that’s just as good and clear as Skype, so it’s as if you’re listening to a live interview, but looking at digital representations of the audience and presenters all the while, which adds a nice dimension to it. The experience wasn’t without its bugs, though–for awhile the avatars of the interviewees would disappear on me, leaving empty chairs and only an animated white dot which indicates that’s the avatar who is speaking. At one point even Mitch got logged out. (Apparently Second Life gets wonky when there are too many avatars in one place, which is unfortunate.)

Still, after only a couple of hours in-world, my brain is spinning with the possibilities of virtual meetups and collaborative efforts. What are your favorite places and events in Second Life?

To see what the interview was like, check out the Ustream video, or join the group called “Copper Robot” in-world to attend future interviews. I highly recommend it. As Mitch told me, Second Life is all about attending events (and he’s got some good interviews lined up in the coming weeks, including my friend Penelope Trunk). Thanks Mitch for making my first time in Second Life a lot less bewildering.