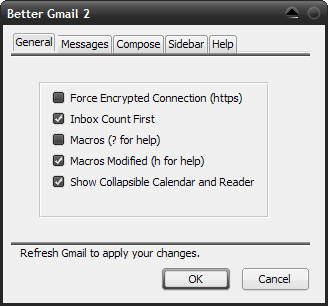 The Greasemonkey Multi-Script Compiler (GMSC) is based heavily on Anthony Lieuallenâ€™s Greasemonkey (single) script compiler. Unlike Lieuallen’s compiler, which is web-based, you’ve got to download GMSC, set up your user scripts by hand, and run the compiler from the command line. (It’s PHP and bash, so Windows users, you need something like Cygwin to use this.) I’ve posted a first draft of the user guide in the wiki, and intend to flesh it out as folks start trying it out and asking questions.

I’ve been building and using GMSC to generate and update the Better extensions for over two years now, but since it started out as a set of quick and dirty for-my-eyes-only scripts, it’s still very rough around the edges. I’m nervous about putting it out there for public consumption, but my hope is that better programmers than I am will start forking the GitHub repository and helping improve things. Eventually I’d like to release an easy-to-use webapp that lets anyone compile a custom extension with multiple user scripts and skins and a tabbed options dialog. We’ll see how it goes!

In the meantime, hardy PHP programmers with an interest in giving it a try can find it on GitHub: Greasemonkey Multi-Script Compiler.

Many thanks to all the Greasemonkey programmers and especially Anthony Lieuallen, not only for building the extension and the compiler, but for open-sourcing it. Without their work, schmoes like me would never be able to build Firefox extensions so easily.