Android users who are switching over to their Google Voice phone number full-time like I am need a handy little app called GV. GV provides calling and SMS support via your Google Voice number in Android that isn’t perfect, but is getting there.

GV’s About dialog says that GOOG hasn’t released an official, supported API for the product, so it’ll only work as long as Google Voice’s mobile interface doesn’t change. No doubt the Android developers at Google are busy at work building default hooks to Google Voice into a future release of the mobile phone operating system. But until Google Voice support comes out of the box, GV’s the way to go.

Tap and hold on a contact you want to text or call, and GV will ask which method you want to use, as shown.

Since I’m switching to my Google Voice number full-time, I checked off that “Use by default for this action” box before I chose GV for both texting and calling.

For the most part the transition to Google Voice with GV is going well for me, save a couple oddities that take some getting used to.

First, to place a call, you tap your contact, and GV calls you first. You pick up, and then it rings your contact. That’s the only way to have your GV number show up on the caller ID on the other end–but it’s still weird when you’re used to just picking up a phone and dialing.

Update: Commenter Oren points out that in GV’s settings, you can choose “Dial out” instead of “Call back” as the method for calling a contact. That option calls Google Voice, which prompts you to “dial the number of the person you want to call.” Hang in for a moment, and do nothing, and GV will ring the contact you chose automatically. Awesome, thanks, Oren! 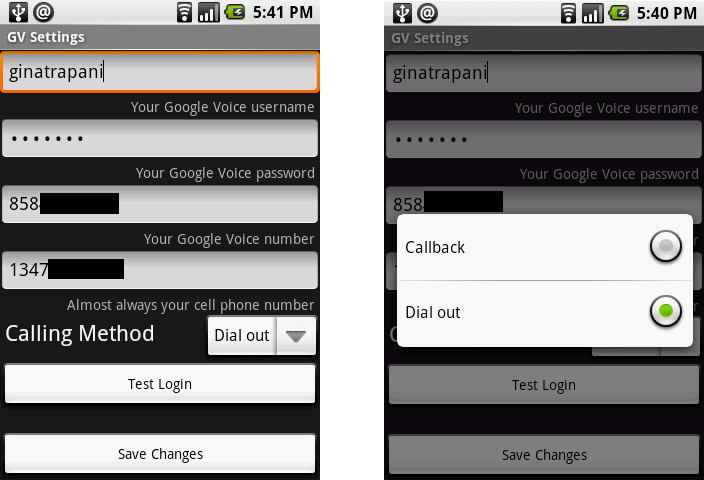 Second, when you text message a contact from your GV number via GV, and that person replies, you can reply back to their message–but the “From:” number is an unknown 406 phone number. Again, you can save that Google-Voice-to-contact specific number in their contact record, but it introduces yet another phone number into the scenario.

Google Voice is still young and needs more work to grab the folks without high tolerances for multiple-phone-number complexity in exchange for the convenience it provides. But for the early-ish adopters on Android, the GV app is a good bet. (Thanks for the tip, emailtoid!)