How to Write a Book with DEVONThink Pro 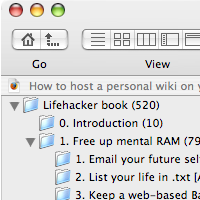 Author Steven Johnson describes what software he uses to write his books, including an insanely useful research database for the Mac, DEVONThink Pro ($79, Mac only).

DEVONThink is a desktop document database, where you can save snippets of web pages, PDF’s, and any other kind of document. Its killer feature is its ability to determine which documents deal with similar subject matter based on the frequency of the words that appear in them. More powerful than just a regular keyword search, when you’ve got a DT database of thousands of documents, this relationship ranker helps you connect ideas you may not on your own.

Back in 2005, Johnson inspired me to try out DEVONThink, and I used it to put together the first edition of the Lifehacker book. Here’s what my database at that time looked like: 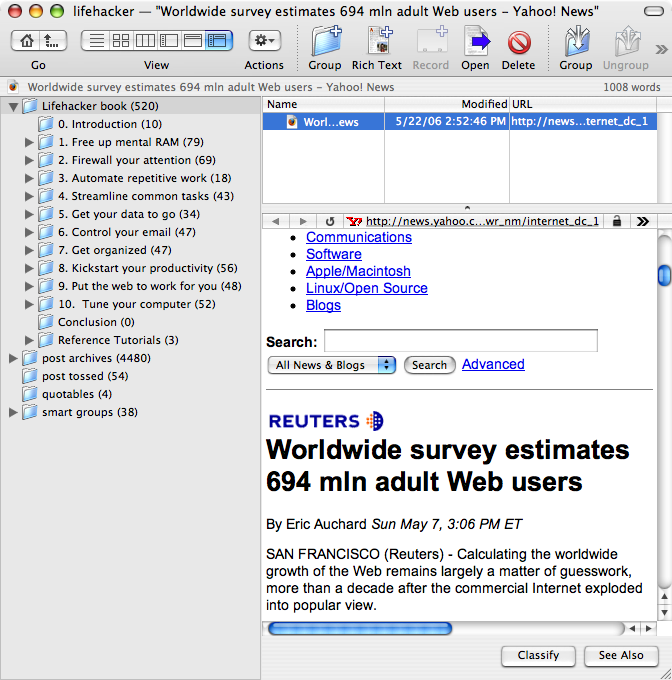 You can see in the left pane that the “Lifehacker book” folder contains one subfolder per chapter. Johnson described months of collecting bits of research and dropping them into DT, then using that research as a starting point for his manuscript. For me, already-published blog posts were my research. So I exported my blog’s post database, wrote a couple of scripts that massaged the files for use in DT, and dropped them in. From there I set up my chapter folders, and dragged and dropped the items I’d use for those chapters into the corresponding folders.

Like Johnson, I used a small percentage of the posts I’d written–you can see above that almost 4,500 items went unused in the “post archives” folder. But like Johnson said, starting out with a big database of research and piecing it all together is a LOT more practical than staring at a blank page when you start writing your book. Here’s Johnson’s post at BoingBoing, How to write a book, and here are more details on how I turned the Lifehacker blog into a book. Here’s a gallery of screenshots of DEVONThink in action for the Lifehacker book.

As far as I know, there’s no true DEVONThink equivalent for Windows. DT’s ability to detect relationships between documents is an area ripe for someone like Evernote to develop something similar for Windows users.